Tales for the Twin Cities

And while Mama and Papa eventually met Thack—and made a damn good show of liking him—they saw no reason whatsoever to modify their stance. My life had been conveniently reduced to a “lifestyle” by then, something easily separable from me, that they could abhor to their heart’s content without fear of being perceived as unchristian. 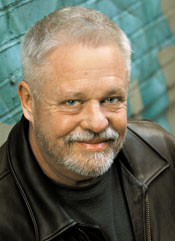 At 64, Armistead Maupin, who lives in San Francisco with his partner, Christopher Turner, is the most revered gay fiction writer of his generation.

Maupin’s Tales of the City series is one of the most widely read queer-inclusive works in literary history, which means that his influence reaches far beyond queer folks. The books and the classic television miniseries they spawned have been groundbreaking in enlightening the masses about queerness, in all its warts and wonder, exemplifying the importance of art as a catalyst for social change. Tales is also a tribute to sexual freedom in a world that’s way too uptight about sex.

On a darker note, Maupin’s The Night Visitor, published in 2000, a tale of deception, delusion, and child abuse, was a harrowing departure from Tales of the City. Its numinous inquiry into sex hysteria would be echoed later in this decade in such Tony Award-winning plays as Edward Albee’s The Goat, or Who is Sylvia and John Patrick Shanley’s Doubt.

On a brighter note, last year’s Michael Tolliver Lives continues the adventures of Michael “Mouse” Tolliver of Tales fame. It celebrates the gift of gay life in spite of homophobia and HIV/AIDS.

Maupin appears June 23 at the State Theatre in Minneapolis for the Literary Legends series to discuss his life, work, and views. I spoke with him by phone recently.

Who are some of your favorite writers and writers who influenced you?

In terms of both of those things, Christopher Isherwood is at the top of the list. I didn’t know who he was until I saw Cabaret in the early ’70s. I was so fascinated by the story of the apartment house with an all-seeing landlady and straight women being friendly with gay men that I went back, and checked the source material [Isherwood’s Berlin Stories]. And as you can tell by that description, Berlin Stories also influences Tales of the City. Isherwood made me aware of how you create a portrait of an entire society simply by looking at the microcosm of an apartment building.

I was lucky enough to meet him shortly after I started writing the Tales for the [San Francisco] Chronicle, and became his friend. He emerged as a sort of spiritual grandfather to me. He was 75 at the time, and gave me a lovely vision of what it would be to grow older as a gay man. Ironically, he had a partner who was 30 years younger, while I have a partner who is 30 years younger than I am. He’s in his mid-30s. Christopher was 48 when he met Don at the age of 18 but looked like he was about 12. But they were the happiest couple I’d ever met. And I still, to this day, think about Chris in terms of how I would handle things at any given moment. And Don, who is 73 now, is still one of my dearest friends. There’s a lovely documentary film made about the two of them called Chris and Don.

Which just happens to play June 28 at the Walker Art Center. With Tales of the City, you rendered a whole new way of people interacting with one another more fluidly, going against the grain of the traditional social order.

I think you’re referring to the logical family versus the biological family. That’s the way Anna refers to it in Michael Tolliver Lives. That pretty much defines the six books that came before. We are locked into biology in a big way traditionally in the world. And I think the acceleration of things in recent years has caused people to realize that they have to form families where they are, and rely on them. Especially queers, because so many of us were expelled in one way or another from our biological families, and we had to create families for ourselves.

That’s why there’s not really a compelling argument against gay marriage, because many of us have been married for years, in one way or another, whether it’s as friends or partners or whatever. We’ve formed our own families, and we’ve counted on those families for support, and they’ve been tested dramatically [for well more than 20] years because of the AIDS crisis. I think I was commenting on something I saw happening in San Francisco, and then for 30 years since the novels began, that phenomenon has spread worldwide.

To what degree has the queer community created a prototype for others who are nonqueer also to reach out to other people?

I think we’ve created a rather dramatic prototype in that regard. In fact, I have very little concern about queers suddenly imitating [Maupin laughs] our heterosexual oppressors if we’re given the right to marriage. We’ve already learned the ways in which we can redefine relationships to make them better serve us. And I think straights stand a much stronger chance of learning something from us.

Society seems to be less porous now than the late ’70s of Tales of the City. Is that the Bush era or computers?

I don’t think Bush has that much power culturally. I think it has a lot more to do with computers. I find it rather encouraging that this whole marriage battle came to fruition in the course of the Bush Administration. We did all this in spite of him, and in spite of a reactionary government, social progress was made. So, that tells me whatever’s happening here is something that will happen almost independently of government. It has to do with more and more of us revealing ourselves to the people we love, and that in turn demystifies the gay experience to people who have previously been frightened by it.

It was my effort to celebrate men of my generation—men who are essentially the biggest survivors imaginable. We survived the invisibility that was forced upon us as gay men in our youth. We survived the backlash of the revolution we launched in the ’70s. We survived AIDS and the horrible backlash to that. And we’re still here, and I think that’s worth celebrating.

I think it’s really bad taste for someone of my generation to complain about getting old. We were given a privilege that many of our brothers were not given. I plan to make the most of it, and so much as Michael is me, he does, too. The novel also deals with the experience of having a much younger husband, which is another thing I share with Michael, but do not find to be an obstacle in any way.