Earlier this summer, at the International Gay and Lesbian Aquatics (IGLA) Championships in Washington, DC, Karlyn Pipes-Neilsen set three world records in her 45 to 49 Masters age group. Her many friends in the gay swimming world were thrilled—she has coached many of them, and they love her positive attitude and competitive spirit. Of course, her husband, Eric, was equally proud. 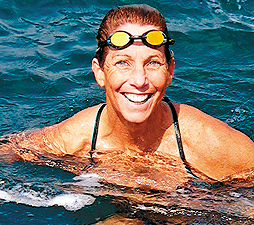 What’s a straight woman like Pipes-Neilsen doing winning medals at a gay event?

Pipes-Neilsen is doing exactly what IGLA encourages: promoting participation in aquatic sports among lesbians, gay men, and friends of the community. Judging from her multitude of gay fans, she’s doing it quite well indeed.

Growing up in San Diego in the 1970s, Pipes-Neilsen was surrounded by gay people. Her younger sister, who was in theater, had many GLBT friends. Her parents hosted a gay foreign exchange student. And the city was home to one of the first gay swim clubs in the country.

From age 6 on, swimming was Pipes-Neilsen’s life. She earned an athletic scholarship to the University of Arkansas.

At the same time, however, Pipes-Neilsen says she had “a poor work ethic, and no discipline. I could have gone to the Olympics, but I didn’t want to do what it took to get there.”

Pipes-Neilsen stopped swimming after a year in college. She spent her 20s in jobs like bartending.

It was, according to Pipes-Neilsen, “an unhealthy lifestyle.”

At 31, Pipes-Neilsen realized her life was going nowhere. She vowed to change, and swimming became her salvation.

As Pipes-Neilsen explains, “It made me feel good about myself, and I was good at it. I’m a Pisces. I need to be in the water.”

Winning medals was not in Pipes-Neilsen’s plan, but six months after returning to the pool, she had her first Masters world record. Now, 15 years later, she owns a phenomenal 162 Masters world marks, as well as national records in the United States, Mexico, Britain, and France. In 2007, she was inducted into the International Masters Swimming Hall of Fame.

But Pipes-Neilsen always remembers that her self-worth is based on her joy of swimming, not her performances: “Swimming has helped me open my lens wide, to take in the whole picture.”

At Masters meets, Pipes-Neilsen looks at everyone participating—men and women from all walks of life, of all body types and all ability levels—and she is elated. That wide lens includes gay men and lesbians. She began working with them in 2005 when she and her husband formed Aquatic Edge, offering swim clinics and camps. Gay teams—traditionally self-coached—clamored for their help. She realized that gay teams were truly inclusive, taking everyone from raw beginners to top-flight elites. As they embraced her, she returned the love.

In 2006, Pipes-Neilsen and her husband decided to show support for the gay community by swimming in the Chicago Gay Games. A woman on a California team objected to her presence, stating she would take medals from deserving lesbians. Pipes-Neilsen countered that she was swimming for times, not awards, and offered to forfeit her medals if necessary. Hordes of gay and lesbian swimmers leaped to her defense, apologizing profusely. Gay Games organizers insisted she take her awards, and she’s glad she did.

“They’re the best medals I’ve ever won,” Pipes-Neilsen enthuses. “They’re shiny gold obelisks—beautiful. They say: ‘Participation, Inclusion, Personal Best.’ And that sums it up perfectly. I’m so grateful the gay community lets me swim in their meets. I feel very included. And I’m proud I’ve included them in my life. Inclusion goes both ways, and it’s neat.”

Before this summer’s IGLA championships, organizers from the District of Columbia Aquatics Club and Washington Wetskins told all competitors that if they wanted to forgo medals, money would be donated to a local health clinic.

“I was happy to do that,” Pipes-Neilsen relates. “It’s such a worthy cause.”

Having swum in countless pools, Pipes-Neilsen is an expert on aquatic events.

At straight meets, Pipes-Neilsen notes, “Everyone gets so worked up over the pressures of competition. At gay meets, they have a great time, then they go out and swim. I’m always more relaxed at those meets. And I end up swimming better.”

Gay meets or straight, Pipes-Neilsen is pleased she returned to the water

“Swimming is for everyone,” Pipes-Neilsen remarks. “Take Team New York Aquatics. They’ve got gay men, and straight women with babies. But when they get in the water, they’re all just swimmers.”