When it started is impossible to stay, but when it did, it probably began something like this: The bones lay in a speckled, off-white mound, tattered tendons dangling like ragged, timeless pendulums. The bones were stained alternately the colors of blood and night, depending on the fire’s split-second caprices. The blaze writhed like a beast trapped in an invisible tar pit, spitting angry, gray froth at the full moon. The tribe had gathered ’round, choosing the fire’s certain anger over the writhing, unknowable shadows beyond its crimson wreath. The game’s gristle gurgled ’neath their navels, which meant it was time to chew another kind of fat. The tribe’s alpha rose to his scarred and callused feet. With the back of his hairy hand, he wiped his hairy mouth, then opened it. “OMG!” he grunted. “That smilodon tasted gr8, IHMO!” 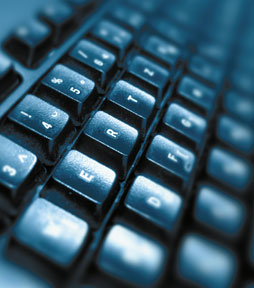 That fire—fueled not by wood and spark, but by the primordial need to socialize for socializing’s sake—started burning within humanity before there was a humanity. It still burns today, its glow formed of photons flickering from computer screens…and the tribe of today is as big as the world. The modern cave fire burns within cyberspace—it’s the online social network community. And it’s a nonplace where your Pride can shine.

So, what is this social networking stuff?

It’s a lot of things, really, but the simplest definition is the grouping of individuals spiraling around some interest or demographic. Pew Internet Research recently revealed that the 35-to-54 demographic is the fastest-growing eater of this computerized social networking fare. According to those same eggheads, 35 percent of adults utilize some form of Web-based social networking, and that number snowballs by the day.

Perhaps this technology’s most important application, where Lavender’s readers are concerned, is letting members of the GLBT community who live in the various hinterlands know that, despite their biological isolation from other gays (or straights, or noncoyotes, etc.), they are not alone.

Specific options for online social networking are endless, and getting endlesser by the day: Facebook and Myspace, Hi5 and Twitter, Flickr and Friendster, LinkedIn and Picasa, Digg and Reddit—each offers a gazillion options for virtual socializing. One particular focus of virtual socializing, which might be of interest to Lavender’s focus, is Variety-Q, a rainbow-colored blaze burning in cyberspace.

As it did with the fireside socializing of the Cenozoic Era, and regardless of which venue you choose, networking begins with disclosure. How it looks can vary, but most often it begins with an online profile.

Opening up to an anonymous audience can be equal parts fun and cathartic, but such an act is something to be taken seriously. More and more, employers are checking the profiles of aspiring employees, as are mothers.

You might ask yourself, before launching a fun fact about yourself into cyberspace: Do you want your grandmother reading this? Now, admittedly, Granny still hasn’t figured out how to set up an answering machine, but that’s not the point.

If a particular Byte of You doesn’t pass this muster, it’s probably best to leave it in your right brain, because once you’ve catapulted something into virtual reality, you should assume it will be there, in one form or another, forever. It’s no exaggeration to say digital disclosure is an electric tattoo that cannot be removed.

A profile is something of a living autobiography, and most so-called dynamic Web sites (with apologies to Batman and Robin) will walk you through the process, but most such life résumés cover such Earth-shatterers as your favorite movies, books, and TV shows, so that visitors can get to know the real you.

Of course, every profile’s capstone is a photo. Assuming you don’t like your look, and depending on how skilled you are with a scanner, you can substitute for your own likeness one of those cute faux photos that come with new wallets. Just don’t be surprised when you find that all your fellow cyberspace cosmonauts are doing the same thing.

Once your profile is set up, you are ready to present your electronic self to the electronic world. You can stand up for queer identity while sitting at your computer.

The point is, GLBT visibility matters. And the latest version of that visibility translates into maintaining a presence on the Internet. When aspiring advocates are out on the World Wide Web, they positively are impacting the gay community, 21st Century-style…plus, it’s a cool, nonthreatening way to meet people with common interests.

Gay Internet users are putting a modern spin on an old axiom by telling the world: “We’re queer! We’re not here! Get used to it!”