When a rock musical wins eight 2007 Tony Awards, including Best Musical, you can’t retreat into excuses about “hating rock musicals” to avoid seeing it. 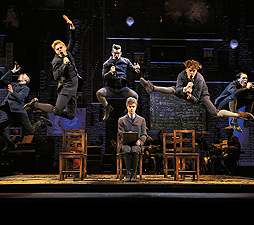 The current musical version’s Grammy-nominated composer, Duncan Sheik, won a Tony for his orchestration. He points out that little vocabulary for sexuality existed in the 1890s, despite Freudian-style concepts having started to make themselves felt, and even though German free love societies were around at the time.

By contrast, according to Sheik, were “diffused, entrenched pockets of bourgeois Lutheran repressive conventionality that wrought havoc on everybody’s sexuality. So, in our Puritan America, where the last vestiges of that [sexual shame and repression] are still with us, it’s still a problem, still an issue.”

Spring Awakening’s Tony-winning book writer and lyricist, Steven Sater, brings it up to the minute when he remarks, “Look at Proposition 8. It’s this unspoken terror about sex in our country—this idea that the only safe sex is abstinence. What are you talking about? It’s contrary to the primary drive of being a human being! And this is what Wedekind was crying out against: this hypocrisy in his time, in the school, in the church, in the home.”

So, how does one theatricalize such repression? Sater shares that the characters are all buttoned-down and breeched-up in their britches.

When they reach moments of great emotional intensity, they, in Sater’s words, “step out, pull mikes out of their pockets, and they sort of rock out as contemporary kids in the same moment. And as the song ends, they get pulled back into their 19th-Century confines.”

Though rock emerged in the 1950s in defiance of the picket-fence, conformist mentality of post-World War II society, Sheik shows it still can resonate with a previous long-gone era. The ferocity and dreaminess of his music corresponds marvelously with the spirit of angst, alienation, and anguish suffered particularly in adolescence in any time period. His favorite section is the second time we hear “The Word of Your Body,” which portrays the gay seduction of the character Ernst.

Twin Cities audiences will be thrilled to know that Bill T. Jones, who has been critically beloved and a box-office draw locally over the decades, won a Tony for his choreography.

Sheik enthuses, “What we got from Bill, which is so huge, and we’re so lucky, was that he created this kind of physical vocabulary that is very totemic and purely gestural. It’s not dance as entertainment. It’s movement as story. It’s movement as character. As Bill famously put it in rehearsal to [director] Michael Mayer, ‘I don’t do numbers.’”