You’ve seen Milk, the highly acclaimed film about Harvey Milk, with Sean Penn as the California gay activist. Now, you have a unique opportunity to see—free—the “original” Milk: Rob Epstein and Richard Schmiechen’s 1984 Oscar-winning documentary The Times of Harvey Milk, narrated by Harvey Fierstein. On January 28 at 7 PM, following refreshments at 6:30 PM, it screens at Spirit of the Lakes (SOTL) United Church of Christ (UCC) in Minneapolis. After the film, a discussion will be led by GLBT activists who were part of the gay rights movement during the lifetime of Milk, together with SOTL’s Pastor, Reverend James Pennington. 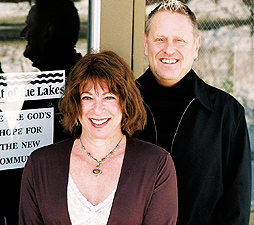 SOTL is a fitting venue for a film embracing Milk’s passion for peace and justice, as the church itself is experiencing a powerful rebirth. Founded in 1988 when several pioneers decided they would create a church where Christ welcomes all, the initial membership was composed of gays, lesbians, and supportive straight friends. In 1992, it was the first GLBT church welcomed into a mainline denomination as part of the UCC. Today, SOTL’s cutting-edge congregation still is rooted in the GLBT experience, but with a straight attendance as well. The focus continues to be on peace and social justice issues.

In January 2007, SOTL called Pennington to lead the church. He had served a number of churches in Wisconsin, as well as serving as Executive Director of the LGBT Center in Milwaukee.

SOTL is in the process of transitioning from its existing home of two decades into a new cooperative housing building to be constructed for seniors and some low-income residents, with new church space on the ground floor.