When spring arrives in Milan, I imagine its entrance must be sudden and exuberant to inspire the looks one usually sees in Vogue. But something must happen to our fairest season as she ventures deep into our imposing continent. When she finally arrives here, she is demure, tentative. Though fashion designers everywhere must kowtow to international trend forecasters, this season’s predictions must have been inspired by someplace like home. Delicate details, muted colors, and youthful silhouettes are this year’s spring. 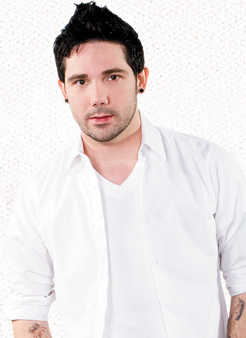 Shakopee-based designer Christopher Straub’s collection takes cues from trend forecasters, but his spring collection is all his own.

Straub says, “It’s definitely inspired by a garden, so lots of lush greens and chartreuse, mixed with grays, whites, and purples.”

While forecasters also help determine which fabrics are available, Straub opted instead to create his own prints from photos of hydrangeas, which are especially meaningful to him at this point in his design career.

Straub shares, “There are these tiny little flowers, but they make up this entity. And that’s a recurring theme in my fashion—these textural elements. With this collection, I’ve incorporated actual created texture and printed texture, and that’s something I haven’t done before.”

Interestingly, Straub designed his spring collection as most established designers do outside of Minnesota—in the fall of the previous year.

Straub states, “That’s how the fashion world works, and it’s funny how Minnesota doesn’t get that. At this fall fashion thing last November, I was the only one showing spring. Everyone else was just showing fall. I had to call it a preview!”

I’m not sure how one could get spring inspiration when our morbid Minnesotan autumn is upon us, and more precisely, how one could forecast a trend that will gel so precisely with the collective international mood.

Straub puts it this way: “The reality is, history repeats itself. So, within how many years, we should be out of a recession, and back into more joyous prints and luxury.”

Perhaps, then, the earliest predictor of economic recovery isn’t the housing sector or unemployment percentages. Look instead for full skirts, fuchsia, and feathers.

Straub speaks very eloquently about his industry. It’s almost enough to make one forget that only a few years back, he was just another contestant on Project Runway.

Before that, Straub was selling custom-made underwear sewn from recycled T-shirts. When he has a booth at the Twin Cities Pride Festival now, he often has people coming up to him to report on that other guy they bought a similar pair of underwear from.

Straub exclaims, “You just didn’t know who I was back then! A lot of people do own a one-of-a-kind Christopher Straub, but they only paid $25 for it back when they didn’t know this guy was going to go somewhere.”

To be fair, it has been a fast transition. Straub now officially has “made it”—with his own Wikipedia page, and all the responsibility and fact-correcting that comes with it.

Straub laughs, “Some people will put things like: ‘Christopher was on Project Runway and has a stupid beard.’ And that was, like, my favorite thing on there.”

According to Straub, the page is currently pretty accurate—for Wikipedia. It leaves out, however, what probably has made him so successful. For example, many contestants who placed higher than Straub have very little in the way of a career to show for it. In addition to his talent and creativity, his desire to seize any and all opportunities that present themselves has made all the difference.

Straub relates, “I actually thought after the show I would be approached by different stores and different celebrities, and that doesn’t happen. You have to get out there, and you have to make your own name after the show, and put yourself out there
actively.”

So, after the show, Straub immediately designed a line of playful accessories, and now is hawking them on ShopNBC. He also has parlayed some of his out-of-the-box challenge experience into working the home-and-garden trade-show circuit, where he creates a wearable look from supplies purchased at Home Depot.

Straub declares, “I could make crazy dresses for the rest of my life. I love it. I was on The Rachel Ray Show, and I made a dress of lettuce and kale or something. I even made a dress out of Cambria countertop. It weighed 63 pounds.”

His intense drive was forged long before Straub’s appearance on Project Runway. One might think growing up in the Edina school system would be a nurturing atmosphere for young artists, and to hear him talk about that, it definitely was, but only ironically.

Straub notes, “I’ve always been an artist since early, early on, and I was often ridiculed for it, and kind of felt separate in school from everyone else.”

But Straub’s feeling of isolation only deepened as the years went by.

Straub recounts, “I almost felt like I thrived more as an isolated artist. It was more like, I don’t care what you feel. I’m going to do what I want anyway.”

Then, when Straub was 12, his father passed away. Straub’s family began having difficulties paying the bills, so he started working at 14 to help make ends meet. However, his father had been a bit of a tinkerer, and enjoyed owning all sorts of tools—a sewing machine included. It probably was intended for minor repairs, but Straub fixed it up, and started playing around with it in his spare time. Sewing became addictive immediately.

Straub recalls, “I couldn’t get enough of it. I just needed to. It was my drug of choice—acquiring fabric.”

But Straub’s hardships weren’t entirely over when he graduated, and left home. In his early 20s, for example, he was homeless for six weeks while he fought to keep himself afloat. His roommate hadn’t been paying his share of the rent, so Straub was kicked out of their apartment. He didn’t have enough money to rent his own place. Staying with family members wasn’t an option, either, so he moved into a warehouse where he was working, and held multiple jobs until he could get back on his feet.

Straub remarks, “It was an interesting time in my life when it was just surviving. That was literally all I was doing. I wasn’t creating a business. I wasn’t creating a brand. It was strictly trying to make it day by day. I think I showered two times in that six weeks. That’s clearly not something I’m proud of, but it’s not something I’m ashamed of, either, because it changes you.”

It’s little wonder that the highly-stressful Project Runway experience only fueled Straub’s drive. During the show, he took care to answer every e-mail he received from fans, even when his inbox swelled to 800 messages. His dedication paid off.

Straub points out, “Some of those early people I talked to brought me into whatever hometown they’re from to be a part of a benefit, or design a product for a company.”

But Straub does have one request of his fans: “People follow me around at the Mall of America with an iPhone camera. It doesn’t bother me, but I would rather meet you, and shake your hand, and take a picture with you.”

If you’d like to meet Straub, rather than stalking him at the mall, he currently is planning a benefit fashion show in the fall. It also may be easier to purchase his designs very soon. He was coy, but did tell Lavender he is working with a major retailer right now, and hopes to have apparel in stores in either late 2011 or early 2012.

We hope to touch base with Straub down the road as well.

For more information about Straub’s upcoming appearances and fashion events, or where to purchase his pieces, visit www.christopherstraub.com.