The story goes that when Adolf Hitler ordered King Christian X of Denmark to force his country’s Jews to wear the Star of David, the monarch defied the Nazis by choosing to wear the yellow star himself, and ordering his Christian countrymen to do the same. As a result of his defiance, and the overwhelming cooperation of his people, the Nazis could not single out Danish Jews, and almost all of them were saved. 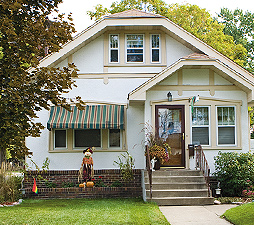 Though it’s a beautiful and moving legend, as a journalist, I feel such sorrow to report that the lovely tale of the defiant king has been debunked as the progeny of a Swedish political cartoon. Oh, if only it were true. It’s such a wonderful icon of human dignity and strength in the face of every terror man has dreamed up to fling at his enemies. Perhaps it is less important if the story is historically accurate. Its great message is true, and its tactics work.

The legend of the Danish King’s defiance inspired Margaret McDonald in 1993, when the Ku Klux Klan became active in Billings, Montana. Allegedly, a KKK member threw a brick through a 5-year-old boy’s bedroom window with such force that shards of broken glass were strewn across his bed, all because a holiday menorah had been displayed in the window. When McDonald heard of the incident, she immediately phoned her church’s pastor to ask him about the possibility of having Sunday school children make menorahs to display in their own windows. That single phone call started a massive movement among Billings Christians (six to ten thousand homes are reported to have taken up the cause), so that the Klan could not distinguish a Christian home from a Jewish one easily. As a result, the attacks gradually diminished, and come Passover, 250 Christians joined their Jewish neighbors at a traditional Seder dinner.

This past summer, Will Peterson and his partner, Ryan Richardson, found a piece of hate mail at their Minneapolis doorstep.

Peterson recalls, “It wasn’t purely homophobic. It was all kinds of phobic. And it just really disturbed me that this person had been at my house, stood on my steps, and put it on my doorstep.”

The couple, who had been living in that neighborhood for a little more than a year, had no idea if they had been the only recipients of the letter. Peterson immediately sent an e-mail to their neighborhood’s Google group to find out.

As Peterson relates, “I had no expectations at all. I honestly just wanted to know if other people had gotten the letter, or if we were the only ones.”

However, when Peterson’s neighbors heard what the couple had been subjected to, the group was horrified, and determined to take action.

Among the barrage of e-mails, Levin remembered hearing about a similar hate mail incident in St. Louis Park a few years ago, where the area’s residents had decided to display rainbow flags as a sign of solidarity. She also knew of the legend of King Christian.

Levin shares, “It goes back to my upbringing in Judaism, and the story about the Danish King. And that always resonated with me as a way to combat hate—when everybody else stands up, and says, ‘Then you’ll have to take me, too.’”

When Levin told her neighbors what St. Louis Park residents had done to combat intolerance, the online group immediately was interested.

According to Levin, “Everyone said, ‘Count me in.’ And people started writing about where could we get [flags] and what would they cost. It was very empowering.”

It was post-Pride, so rainbow flags were difficult to come by, but as soon as they arrived in the mail, the neighborhood sprang into action. The area around 45th and Cedar now is dotted with rainbow flags—tucked into window boxes, wedged into gardens, even taped onto a child’s tricycle.

Peterson enthuses, “There’s been this amazing outpouring of support, and it’s something I’m not used to, being from a small town. Maybe in a year or so, I will have processed it fully. We’ll see! It makes me feel like I never want to move—you find a neighborhood like that, and I think we’re lifers now.”

Of her neighborhood’s colorful makeover, Levin remarks, “Everybody who drives down our street sees that almost everyone on the street has a rainbow flag, and I think that says something. Maybe they think everyone on the block is gay, and we’re willing to say maybe we are”—adding with a laugh, “There’s strength in numbers!”

It may be a cliché, but Levin is correct. If enough people stand together, united against all forms of intolerance, we could change our cultural trajectory. The people of Billings and at least two neighborhoods in the Twin Cities have proven that to be true. Someday, a world leader will be strong enough to do what King Christian did not. Until then, we will have to rely on the kindness of our neighbors.