After 18 years, seven studio albums, 12 drummers, almost a thousand gigs and counting, Jon Ginoli, founding member of Pansy Division, not only has seen it all, but also tells all in his new book of memoirs, Deflowered: My Life in Pansy Division. 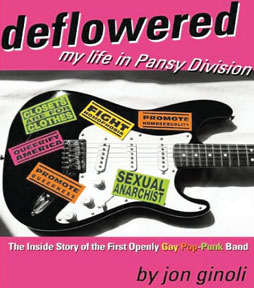 The first openly gay pop-punk band, Pansy Division initially went on tour in 1993, but it wasn’t until a year later, when the band began touring with Green Day, that he started keeping a diary.

Ginoli says, “I didn’t think it would end up being in a book or anything. I thought it’d be a good way to document details I thought I would forget in the crush of events.”

But the tour diaries in Deflowered only tell part of the story. Ginoli recounts his own roots: growing up in Peoria, Illinois; coming out in college; and reconciling his interest in rock and punk music with his identity.

As Ginoli recalls, “There always was diversity [within gay culture], but it was harder to see, and maybe there was less of it. I wanted to assert that the gay experience should be broader than what is normally thought of as the gay experience.”

Pansy Division—at first only Ginoli—started in response to an apparent void that desperately needed to be filled. He had found inspiration in women musicians, most notably at the time performance artist Karen Finley and the group Two Nice Girls. He would watch the fearless, unapologetic, and uncensored performances, and ask himself why men had not been breaking boundaries in the same way.

The day after a Two Nice Girls show on his 31st birthday, Ginoli penned the lyrics to the song “Fem in a Black Leather Jacket,” and recorded it, along with three other songs, in the first week of January 1991. Those songs later would appear on Pansy Division’s debut album Undressed, as would bassist Chris Freeman and the band’s first drummer, Patrick Hawley.

Ginoli explains, “In the process of writing the book, people started talking about how historical it is. A lot of people who follow our band weren’t there at the beginning. They don’t know a lot about how things came to be.”

One of the most exciting gigs in Pansy Division’s earlier years was a performance with Bikini Kill and Tribe 8 at Gilman Street, an all-ages punk club in Berkeley, California.

According to Ginoli, “I think there is a parallel development between the riot grrl movement and Pansy Division, even if some of the things we were getting at were slightly different.”

While riot grrls sang about love and sex from a viewpoint that strove not to be exploitative or to objectify women, Pansy Division was turning the tables, and objectifying men in the same way pop music objectified women.

Ginoli long has found broader understanding of women through his own identity: “I think being gay allowed me to be more aware of the kinds of issues women have had to deal with. I realized long before I started Pansy Division that I had a lot more in common with feminists than I did with regular guys.”

Although Pansy Division often has been considered queercore, an offshoot of punk, Ginoli wants to distance the band from that label. As he points out in the book, since the band started, the evolution of the movement has come to mean that the label doesn’t fit anymore. It also carries an unwanted connotation.

Despite that caveat, one of Ginoli’s next projects will be a definitive compilation of early-’90s queercore.

“A lot of the bands that were coming around in our wake or at the same time are far more obscure,” Ginoli notes.

This year already has been one of Pansy Division’s busiest. In March, the band released That’s So Gay, their first album in almost three years, as well as the DVD Pansy Division: Life in a Gay Rock Band, a documentary directed by Michael Carmona. Bassist Chris Freeman, who met Carmona while working at Columbia College

Hollywood, was the film’s coproducer and editor.

The East Coast leg of the band’s 2009 tour kicked off June 17 in Boston, with a June 21 stop in Minneapolis, and wraps up in late July. The West Coast leg starts mid-August.

Ginoli remarks, “I’m hoping the stuff I’m doing this year will lead to other things. I’m not exactly sure what those
things are.”