If the good Fairy whispers into your cradle, “May you live in interesting times,” you may be destined to be a Mississippi Sissy. Kevin Sessums must have had one heckuva Fairy: He was sissy in the civil rights 1960s South, and his memoir is bookended by death—both parents gone by the time he was 8, a dear friend bludgeoned to death when the author was 18. Fortunately, the Fairy added generous dollops of Southern humor, sense, and sensibility to the mix. 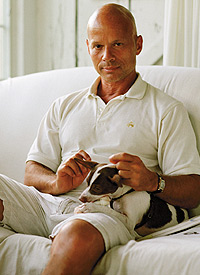 A well-known editor, writer, and celebrity interviewer, Sessums limns his kith, kin, tricks, and Eudora Welty—doyenne of Jackson, Mississippi—in all their gothic splendor in his vibrant memoir Mississippi Sissy.

I have often gotten strong aural or visual stimulus from a book, but you add odor—I could smell the inside of that old movie theater, for example. Do you know how you do that?

I have no technical answer to that question. It’s like asking an actor how he or she furnishes emotion to a scene. It just surfaces. If we talk about such things too technically, the ephemeral quality you’re getting at would perhaps disappear altogether.

I do know that I had the grandson of one of the old segregationist Mississippi senators I mention in the book—either Stennis or Eastland—a sissy who now lives in San Francisco, telephone me, and say the same thing. The book summoned smells for him he hadn’t known since his childhood in the Mississippi Delta. That made me feel rather like that Parisian sissy, Marcel P.

Does a career that involves interviewing major celebrities have a special resonance for you?

I have a very working-class, blue-collar attitude toward interviewing celebrities. I call it my truck-driving job. I put the glamorous cargo in, and haul it to deadline, dump it out, and put some more glamour in the back and drive on. I know that people read my magazine stories on airplanes, and sitting on the toilet.

I am unintimidated by fame, and can carry on a conversation with anybody. That comes from sitting inside with all those Southern women as a little sissy. After spending time with Eudora Welty when I was a teenager, interviewing Madonna is a piece of cake.

Race permeates and frames Mississippi Sissy. Would you comment on the black women who appear in the book?

Matty May—our maid—is the heroine of the book. She worshipped Sidney Poitier when I was growing up, and used his name—“Poitier, Poitier, Poitier”—as a kind of mantra when she would hear the N-word spouted at her.

When a niece or nephew graduates from high school, I take them out to LA for Oscar weekend as my kind of Auntie Mame gift to them. We go to several parties, including the picnic that Diane von Furstenberg and Barry Diller give at their Beverly Hills estate, and the Vanity Fair Oscar party.

When the hardback of my book was about to come out, I had taken a nephew out, and we were at the picnic, and a couple of tables over sat Sidney Poitier. I went over to him and introduced myself, and knelt at his feet and told him the story of Matty May. He held my hand, and would not let it go until he heard everything I had to say about her. Though he was 80 at the time, he sat on that picnic table with an erect dignity, his spine as straight as the “I” in SISSY. I hope that now, his mantra, when he is down, just might be “Matty May, Matty May. Matty May.”

Why this particular time frame: from a death to a death? It must have been both traumatic and cathartic to write.

The hardest section was writing about the death of my mother. It was the only time in my life I’ve had physical depression—suicidal thoughts. I kept approaching the book as a writer—getting the sentences right, the narrative flow right, the rhythms of the words right—so that it didn’t dawn on me till almost too late exactly what I was writing about in that section. I became that frightened little boy all over again. But once I realized that, it all sort of lifted, and I wrote on.

Do you have a partner?

I would love to have a partner, but I’ve been a failure at that part of my life. My brother and sister—who had the same life as I—have both had partners for over 20 years. My brother’s wife was his childhood sweetheart. My sister is a lesbian, and has only had two relationships her whole life.

The one great guilt of my life is that I was never a big brother to them. When I would tell that shrink of mine about this, she’d always say, “You don’t get it, do you? Before you went into your room and shut the door after the trauma of your parents’ deaths, you stood in the doorway, and absorbed everything for them. You were just old enough to get all that was happening. Never say you were not a big brother to them. You took the emotional bullet.”

You used lovers’ and seducers’ names, then ran the finished manuscript by many of them. What was the reaction?

I let everyone mentioned in the book who was still alive read an early manuscript, and vet it. One guy didn’t want me to say he sucked my dick, so I changed that to my sucking his. The truth can be told from the top down or the bottom up, so to speak.

I was banned in Tupelo from reading and signing my book, once the owner of the store read the sections concerning Frank Dowsing, the African American all-American football player with whom I had the affair. I thought I portrayed Frank with dignity and respect and love—but some people cannot put the words “love” and “respect” and “dignity” in the same sentence with “homosexual,” no matter what that homosexual’s skin color might be.

In 12-step programs, they say you’re only as sick as your secrets. I’ve always had a problem with keeping mine. I think I’m the only person who’s ever gone to a shrink to shut down. I would plead with mine to help me develop some mystery in my life.

I’ve always used honesty as a weapon. It’s even an interviewing technique of mine. Tell the interview subject all your dark secrets to open them up. That’s what editing is for. You can always cut your own secrets out of the story. I guess with Mississippi Sissy, it was time to keep them in.