Sherry McGregor: The Out “Karate Kid”

Growing up in Florida, in a sixth-generation Southern family, Sherry McGregor battled demons. While her mother worked her way through serial marriages (she is now on her eighth), McGregor felt uncomfortable dating boys. Finally, in her senior year of high school, she began a relationship with a 25-year-old woman she’d met at church. For the first time in her life, she felt free. 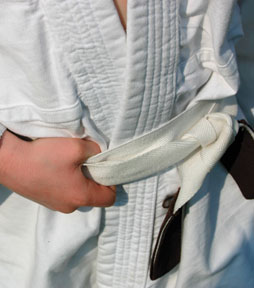 As a scholarship basketball player at a South Carolina Baptist college, McGregor thought her life’s mission was to work in youth ministry. She joined Fellowship of Christian Athletes, and became a noted speaker.

But at the same time, McGregor continued her involvement in martial arts—a passion since elementary school—and over time, that stereotypically macho sport allowed her to realize who she truly is: an out, proud, “peaceful warrior.” Her first exposure to martial arts was in a six-week after-school karate class. Her mother, who just had left an abusive husband, wanted McGregor to learn to take care of herself.

According to McGregor, “Remembering how hard it was as a 5-year-old to watch my mother being beaten has ignited a special passion in me to teach self-defense.”

McGregor has taken her teaching far and wide. Currently the highest-ranking female martial artist in the United States, she has been featured in People Magazine, as well as on the Discovery Channel and the Learning Channel. She is the only female member of a combat ki team (which emphasizes body and mind integrity) who travels the world demonstrating how to take kicks and punches to vital areas of the body without injury. After women watch her take strikes to her throat by an NFL player, or see four 200-pound men punch her neck, they’re inspired to take up martial arts, too.

This athlete has represented the United States in karate world competitions. She is a two-time US Open champion. She is a fourth degree black belt or above in an astonishing 17 different styles of martial arts (including 10th degree, the highest possible, in karate). She has been inducted into the Martial Arts Hall of Fame as both a competitor and a master teacher.
Throughout her 36-year career, McGregor’s identity as a woman, and a lesbian, has evolved.
McGregor recalls, “As a kid playing backyard games, I always saw myself as a boy. When I finally heard the word ‘gay,’ I figured out what it all meant.”

Martial arts is a male-dominated world. Even today, most of the athletes McGregor trains with are men.

McGregor says, “They see me as one of the guys. I’ve never asked for favors. They love that attitude.”

Still, fearing their reaction in so intimate an environment, it took years before McGregor came out to them. She began the process a decade ago, and grew “really bold” about it in the past five years.

Their reaction, McGregor relates, is “great. They love it. They say we can girl-watch together,” but, she admits, “I don’t know if it would have been the same if I hadn’t already had their respect from training.”

McGregor believes a higher percentage of lesbians are in martial arts than gay men—perhaps half the female instructors she knows are gay. One reason might be that the first women attracted to male-dominated martial arts were ardent feminists with the courage and willpower to assert themselves. Many were lesbians.

But, McGregor believes martial arts are good for women, whether they are gay or straight. It builds confidence, provides fitness, and offers entry into a community of supportive, like-minded people.

McGregor describes her teaching technique as “high-energy and jovial. I’m not militaristic, which makes me different from the traditionalists. I think people learn better in a fun environment.”

Perhaps that attitude developed from McGregor’s early introduction to martial arts, as a means to escape her stressful life.

McGregor, who does not think being a lesbian is relevant to her success, feels martial arts should appeal to all females, regardless of sexual orientation.

In McGregor’s words, “I don’t know of any other field, except maybe law enforcement, that would accept me so easily as one of the guys. I don’t have to be more feminine than I am. That’s a very freeing feeling for anyone.”

Not long ago, McGregor fell in love with a woman, and moved to Seattle live with her. She is writing a book on self-defense for “everyday people.” She travels far and wide, offering seminars and private lessons to individuals, groups, and corporations to help people of all ages and experience levels learn focus, leadership skills, perseverance, discipline, problem-solving, and a strong work ethic.

Now completely out, McGregor looks forward to using martial arts to help gay youth. In some ways, that is a long way—and in others, just a short hop—from her college vision of “youth ministry.”