Serving as Two Masters at the Minnesota State Fair

I stared at Master Chef Dan “Klecko” McGleno walking across the Minnesota State Fairgrounds about four years ago, and it was a terrifying sight to behold. My eyes were locked on the tall, spiky, dirty-blond hair atop his 6’ 3” strong male frame. His long baker’s coat was unbuttoned, whipping in the wind. He was wearing black jean shorts. He sported tattoos on heavily muscled calves accented by Size 13 black combat boots. This was a chef with “a pair.” 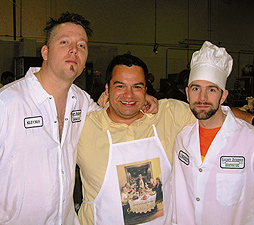 We met a year later. I was scheduled to appear at the Saint Agnes Baking Co. Booth to show fair-goers what was new in pie-baking gadgets. Klecko greeted me like we were best of buds. Warm and kind, he was reassuring about my presentation. I was a bit surprised, because the year before, when I watched him walking across the fairgrounds, he scared me. He appeared to be the type of guy I avoided in high school, because he would beat the crap out of me just for looking at him. Now, I was shaking hands with this gracious Goliath.

Presently, Klecko is getting ready for his 12-day stint at this year’s State Fair, where he is Master of Ceremonies for the Saint Agnes Baking Co. Booth in the Creative Activities Building. He has scheduled 48 shows taking place over 12 days in the room next to the booth. He hosts four shows a day. Each lasts approximately 30 minutes. Once the shows are completed, he doesn’t go home, but sells artisan breads at the booth until 9 PM each night.

Certainly, Klecko doesn’t do all this for money, but because he loves bread, food, and the people from the Twin Cites and surrounding areas who are shining stars in this culinary world.

This is Klecko’s fifth year as host. He begins scheduling right after Christmas, but searches year-round for culinary talent. He’s not looking for the people you always see in local magazines or on television. He seeks the quiet food talents who inspire the crowds at the fair. He wants those fair-goers to take something home with them besides discounted yardsticks.

When we sat down at Kopplin’s Coffee Shop in St. Paul to talk, Klecko wore his signature white T-shirt and black jean shorts. His enthusiasm for gab was contagious, and he was entertaining.

Klecko had just returned from three weeks at the University of Moscow on his third trip to Russia. He was energized.

As Klecko recounted, “I spent half my time at the Russian University of Cooperation Moscow Division, and half my time at Krasnodar, a city in Southern Russia on the Kuban River. My job was instructing top baking students in the methods and technologies for baking.”

On another note, Klecko related, “I also just completed a book on dog biscuits that is being published by the Minnesota Historical Society. It features high-end ingredients to create biscuits for man’s best friend. Some of the recipes include the greatest ingredients in the world—better ingredients than in half the restaurants in the Twin Cities.”

What are those ingredients?

In Kecko’s words, “Saffron is just one of the ingredients in the ‘Status Biscuit.’ I also am using squid ink and many other items to enhance the biscuits.”

The Master of Ceremonies, who will host himself in a couple of shows at the Saint Agnes Baking Co. Booth, shares, “I will demonstrate Caviar Dog Biscuits in one show, Key Lime Sweet Breads another day, and Zombie Cookies [molasses and cayenne pepper are just some of the ingredients] on another day.”

I asked Klecko to describe the worst guest he’d had so far, and he replied, “It was a woman doing a Sweet Potato Pie with then-St. Paul Mayor [Randy] Kelly. Thousands of people showed up for the event—except the pie baker.”

And the best show to date?

According to Klecko, “The number-one best show was a pie-making show with John Michael Lerma. [I grinned.] Another was Scandinavian Cuisine, and then one for coffee—roasting, and information about coffee from around the world.”

As for this year’s highlights, Klecko stated, “It’s back to basics—back to the bakery. I’m taking out the chef superstars. Fair-goers come to learn. I am going to provide them with the best, and show how they do their work: Best Pie Baker, Best Rye Bread Maker, and Best Canning Person. I’m bringing in people like Todd Churchill from Thousand Hills Cattle Company.”

Be sure to introduce yourself to the Master himself. In between his show-hosting and bread-baking, ask to see the Ronald Reagan tattoo on his upper arm. You’ll make an original—and very tall—friend in Dan Klecko.