Even though I’ve been with Lavender now for the past five years, it’s still a treat to be offered the opportunity to appear on the cover. I mean, what little drag queen doesn’t hope to grace the cover of a magazine some day? The two other times I’ve been on the cover, I was photographed. This time around, the powers that be thought it’d be fun to try something different. “Maybe a caricature of Wanda,” they said. 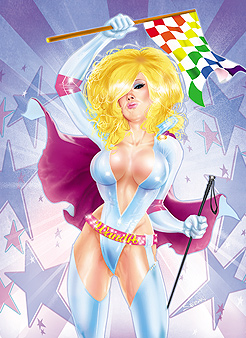 Right away, I knew exactly who I wanted to immortalize me in ink. His name is Sebastiàn Cichon. I met him through one of my longtime listeners in Poland. He’s an accomplished artist, illustrator, and animator. He has sketched my likeness in the past, but until now, we never had the chance to display his amazing talent with such prominence. I’m beyond grateful that he graciously agreed to create such a beautiful image.

Best of all, Sebastiàn does it for a living, and he’ll do it for you, too! If you’re interested in hiring him to work on your project, feel free to contact him directly. He maintains a gallery of his work at http://seban001.deviantart.com, or you can e-mail him directly at [email protected]. Tell him Wanda sent you!