Running for Many Reasons

In high school, Joe Simenic always ran. His goal was tangible: the finish line of a cross-country or long-distance race. But looking back, he realizes he sought something else. “Running can be an outlet,” Simenic says. “It’s a way to relieve stress, to take the focus off other parts of your life you’re not completely happy with.”

For Simenic, that meant his sexuality. He realized he was gay in his early teens, but for years did not accept it fully. He was much happier with his identity as a runner at a Cleveland-area high school, where he competed strongly at the regional level. 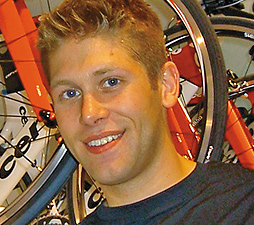 Still conflicted about his sexuality, Simenic was accepted at the United States Military Academy, and entered in the summer of 2001. It was a good fit: He continued running, and in many ways avoided dealing with being gay.

“West Point was great,” Simenic relates. “You’re so busy, you’re never thrown into a lot of social situations where you have to interact with women.”

That was not the reason Simenic applied—he truly wanted to be an Army officer, learning how to lead, while overcoming the Academy’s storied physical and academic challenges—but it was an added benefit.

As a plebe, Simenic was one of two walk-ons for the cross-country team. Competing for a Division I program made him a much better runner. But balancing the demands of a varsity sport with life as a cadet proved difficult, so he spent his last three years on the less intense marathon team. “Less intense” is relative, of course: He ran in a number of grueling races, including three Boston Marathons.

West Point was “a very heterosexual institution,” according to Simenic. The only time he heard gay issues discussed seriously was in a professional military ethics class his senior year. Otherwise, gay topics were treated either as a joke or something hush-hush.

However, Simenic shares, “I really enjoyed the people. And West Point changed me quite a bit. I’m definitely more disciplined. A lot of times it sucked there, but I knew going in it would.”

Discipline is a common theme in much of Simenic’s life. Recently, he has taken his commitment to a new level: competing in the triathlon. Inspired by West Point swimming instructor Lou Tharp’s book Overachiever’s Diary, Simenic decided to give the spectacularly demanding swim/bike/run event a shot. With the help of Tharp and coach Stefan Bill, Simenic spent much of the year improving his weakness—swimming—in preparation for a series of competitions this past summer.

Like long-distance running and West Point, the triathlon demands intense focus, along with physical pain.

Can a correlation be made between that concentration and drive, and examining (or not) one’s sexuality?

“There are a number of gay athletes in endurance sports,” Simenic explains. “It’s a great way to beat up your body, and punish yourself. It may be a way to get away from our thoughts, and escape.”

Yet, Simenic notes another side to such punishment. Competing in endurance sports also may give an athlete time and space to ponder important things—like sexuality.

Another reason gays gravitate to endurance sports, Simenic points out, is the chance to prove oneself to others: “You think, ‘Not only can I do this, but I can do it better than you.’ As gay people, we’re always trying to gain acceptance in some part of our lives, to compensate for another part where we may not be as accepted.”

Endurance sports as well might lend themselves more to acceptance of gays than team sports.

“It’s hard to quantify,” Simenic observes. “But people can detach themselves better. There’s not as much touching, not as much of the relying-on-team aspect.”

Simenic agrees with the theory espoused by Triple Ironman competitor Christopher Bergland: Because endurance athletes are so focused on their own training and competitive regimens, they don’t have time to worry about anyone else’s life.

When he was younger, Simenic recalls, his embrace of endurance sports as a way to deal with sexuality was subconscious. While still not completely comfortable with his sexuality, he is now aware of his issues.

Simenic states, “I’ve come a long way since the military.”

Most people in the triathlon world know Simenic is gay. In part, that’s because he makes training videos with gay.com. So far, he has encountered no backlash. In fact, few people care. That allows him to concentrate on other aspects of life—this year, he completes his graduate degree at Columbia University’s School of Public Affairs—and prepare for a career in government or consulting.

Simenic believes he may not have pushed himself as hard had he not been gay.

“That’s probably been a driving force in my life,” Simenic remarks. “But it’s less so now than when I was in the Army. I’m still young, but now, I push myself for my own sake. Being gay is less of a factor. I realize I don’t have to prove anything to anyone.”