Run Away To Join The Circus?

Growing up, every child dreams of running away to some fabulous, fun place. The most common dream always has been the circus. Who didn’t want to be a carny? It conjured up traveling around the world; living in a place of cotton candy and deep-fat-fried food; having no bedtimes; and getting to perform death-defying acrobatic acts. 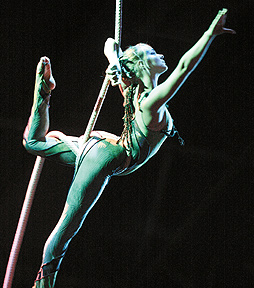 I was 8 when I packed my Legos, ready to set off to my new life. Sadly, my sister bribed me with a new toy. I went back to my bedroom, and unpacked my Legos. My not having thought about food and clothing showed how ill-fated and poorly planned my escape was.

But my dreams of death-defying acrobatic acts never died. So, when late last year I learned late of an organization that teaches children how to perform, and allows them to be tossed into the air, flipping gracefully before landing again, I was heartbroken to discover I was too old to join.

For those who aren’t too old, that place of dreams is Circus Juventas, dreamed up by Dan and Betty Butler, who got to live the life of the circus, and decided to give back to the community in the best way they knew how.

Started 15 years ago by the husband-and wife-team, Circus Juventas was to be a place where people who didn’t fit into one mold or the other would have a place to go and belong.

Dan Butler says, “We hope that when people come here, they accept you for who you are, and it doesn’t matter if you’re tall, short, skinny. Everyone is competing and supporting each other. It’s all within your own grasp how hard you want to work. It’s hard to find that today. Sports are great, but if you’re not the best, you don’t play. Kids make fun of kids still.

“We started the circus because we felt so blessed in our lives. You get to an age, and you wonder what’s the purpose—why are you here; what’s the bigger picture. We wanted to do something meaningful, and we knew the circus was important to us. Initially, we wanted to do something special for the community. We had no idea what we were getting into—in a positive way. But very, very early on, we started to verbalize the noncompetitive environment—girls working side-by-side with boys.”

That sense of wanting people to fit in started early for Butler. Growing up in a traditional middle-class family, he knew what it was like to not fit in.

As Butler recounts, “I come from a banking family, but I was always the black sheep of the family. You never know it when you are. I was in the middle, and didn’t know what my way would be. I realized through some other events in my life. I was insecure, because I wasn’t very good academically, or the way I thought I should be athletically. I wasn’t quite good enough to play football. So, I went out for the circus—and it was absolutely perfect for me. If you didn’t fit the proper mold, you couldn’t do what you normally do, but there, it was different. Were you overweight or underweight or shy, it didn’t matter. There was something you could do there. You had to have those different body types.”

Fast-forward to today, and the 15th show for Circus Juventas, Yulong: the Jade Dragon—with the help of some amazing teachers, and a partnership with the Chinese American Association of Minnesota. The story: The ancient Chinese kingdom of Emperor Tianzi is under attack, forcing the peace-loving ruler to draft a massive army to protect his people. Hua Mulan, a young woman who defies the tradition of the all-male army, disguises herself as a soldier to take the place of her elderly father.

Expect nothing less than extraordinary acts of athletic artistry from 8- to 22-year-olds, as they defy gravity and all odds to defend their kingdom.

Butler points out, “One thing that is unique today is that boys and girls do all the acts, boys do girl acts, and girls do boy acts. Whether you’re a boy or a girl, you can do whatever you want to.”

Betty Butler adds, “We never thought we would be more than a community program. We had no idea that it would be embraced, and go on to what it is today.”

Living dreams and giving others a chance to feel like they belong never ends the way you envision it. Nearly 800 students who enrolled this past fall don’t need to pack their Legos, and run away to the circus. The circus came to them.