Rufus Wainwright Brings His Aunt to the State

Rufus Wainwright is a drama queen—in the best meaning of the phrase. The singer-songwriter has cut a unique path through the music business, mixing rock-solid songwriting with a gorgeous voice and a singular approach to his songs.

After all, how many other pop stars could pull off a concert replicating a classic performance by Judy Garland? 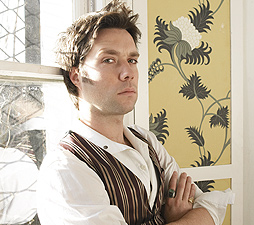 So, it was no surprise that, when asked what he was up to, Wainwright’s simple reply was, “I’m busy here in New York, working on my opera.”

Wainwright’s style is difficult to pin down—Elton John crossed with Noel Coward comes close—but with the lush arrangements you would expect from a Broadway musical.

Music fans can hear for themselves when Wainwright returns to Minnesota October 16 for a concert at the State Theatre. The evening will feature him alone with his guitar and piano

“When I do a solo show, I’m observing the corpse, and focusing on the bones of my music. It’s really the sort of the hard interiors on which my songs are built,” Wainwright says.

From his self-titled debut, Wainwright has cut his own musical path. Ignoring current trends and conventions, he instead is interested in making music that is intensely his own. He cemented his rising star with his sophomore album, the equally strong Poses.

After falling into a typical pop-star problem—drug addiction—and bottoming out in 2002, Wainwright entered rehab. He then started a fresh take on his career, issuing a pair of linked collections, Want One and Want Two; one of the best albums of 2007, Release the Stars; and his ultimate diva moment, a live recreation of Judy Garland’s concert on April 21, 1963, at Carnegie Hall (issued on disc as Rufus Does Judy at Carnegie Hall and on DVD as Judy, Judy, Judy).

As a songwriter, Wainwright always has been open about his emotions, his fears, his loves—and his sexuality. He has been part of the leading edge of openly gay artists who make no secret of their orientation. In his case, it is incorporated fully into his songs, many of which trace the ups and downs of relationships.

Wainwright’s family tree runs deep—very deep. He’s the son of singer-songwriter Loudon Wainwright III and folksinger Kate McGarrigle. His sister, Martha, is a musician with several albums to her credit, as is his aunt, Sloan (the opening act for the State Theatre gig). If you go back a generation, his grandfather, Loudon Wainwright Jr., was a musician and journalist, best known for editing Life Magazine.

“We’re a goddamned department store,” Wainwright remarks about his musical family, noting that he has shared the stage with all of them at one point or another during his career.

Release the Stars is more than a year old, but it doesn’t look like another pop album is in the cards for the near future.

“I’ve got a couple of theatrical releases in the works. One of them is the opera [Prima Dona] that will premiere next July in Manchester, England. Another one is a theatrical piece with Robert Wilson that is based on Shakespeare’s sonnets,” Wainwright relates.

That shift away from the pop world has been brewing for a number of years.

“It’s definitely an aspect of my music that many people have slighted in the past. I am arguably the least conventional pop songwriter around. My pieces really go against the grain of what is expected in the pop world,” Wainwright explains.

These factors have pushed Wainwright toward a different musical world, where his inherent theatricality serves as a definite asset.

According to Wainwright, making music in the pop world—even as an established artist with a loyal fan base, is “a double-edged sword. On the one hand, it really defines me, and helps me stick out from the crowd. It enamors people to me, and they enjoy it. On the other hand, it’s hard to box me, and it’s hard to promote and describe. In our musical climate right now, everything has been dumbed down so much just to get past the starting gate.”

So, that means probably no collaborations with T-Pain or L’il Wayne—or an album of hits provided by the Matrix—in Wainwright’s future.

The week after his Minneapolis show, Wainwright will join a host of stars to present a live version of Goodbye Yellow Brick Road, Elton John’s landmark album celebrating its 35th anniversary. The benefit—presented by the Elton John AIDS Foundation, Broadway Cares/Equity Fights AIDS, and Friends in Deed—features contributions by the likes of Joey Arias, Ben Folds, Jane Krakowski, Stew, Jake Shears of Scissor Sisters, and the casts of Hair and The Lion King, plus John himself.

“I’m singing the title track. It’s something I’ve done before,” Wainwright shares. “I was asked to do it for another event, and I gravitated toward the song, because there is the Judy Garland reference. I heard it on the radio one day when I was asked to sing an Elton John song years ago. It pulled me over, and said ‘I am the song you are going to sing.’”

Wainwright feels a strong affinity musically for John, who paved the way for theatrical pop singers more than three decades ago, pointing out, “Elton has had an influence on everybody in music, not just pop, but also classical and jazz. He is the consummate genius and professional. There’s a big influence on my music, especially on Want One. My song ‘Going to a Town’ [from Release the Stars] is very reminiscent of Elton as well.”

And the matter of friendship, as Wainwright puts it: “I’m friends with Elton and a lot of the other performers on the bill. You know, all those flaming queens. I’m one of them, of course. And when Elton beckons, you come.”