Recently, I had the pleasure of talking to LPGA icon Rosie Jones about love of golf; coming out as a professional athlete; and how it all paid off for this fantastically happy, confident, and genuinely intriguing athlete.

Born in California, Jones was the seventh of eight children. Competition was high in her household. She always was surrounded by golf, with her father, an avid golfer, being her primary role model. When she was just 8 years old, she came home one day with a broken old golf club she had found, and begged her dad to take her to the golf course with him. And the legend began.

Jones was an athlete in a time and place when other girls her age were not heavily involved in athletics. She remembers there just were not a lot of girl athletes. She excelled at sports of all kinds, not just golf—she loved to play softball and football with the boys. 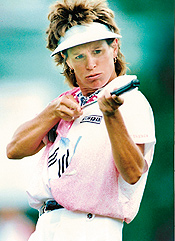 Truly a gifted golfer, Jones shot through the ranks in high school and at college, playing tournaments nationwide, including the Chicago Open when she was only 19 years old. Her many successes earned her offers from Big Ten schools in Texas and Oklahoma, and eventually, she headed to Ohio State on a scholarship.

Proudly, Jones graduated college in 1981 with a degree in recreational education. It was a particularly special accomplishment for her.

Jones says, “Looking back, I remember how easy it would have been to go out and make money doing something I absolutely loved, as any young person might dream of doing.”

Admittedly, Jones could have gone pro right out of high school, but people close to her kept her grounded, and pointed her toward college. What a choice it was!

“I enjoyed playing in those yearly national tournaments alongside women I would later compete against in the LPGA,” Jones recalls.

Upon going pro, Jones became one of the top money winners the LPGA had ever seen, taking 13 LPGA titles during her 25-year career, and establishing herself as one of the greatest women golfers of all time.

Something unexpected happened in 2003. Judy Dlugacz, owner of lesbian travel company Olivia, approached Jones to endorse it while on tour with LPGA.

As Jones recounts, “I thought about it literally for one minute, as my mind swirled in fast motion, counting up all the ways coming out to America while still competing on the LPGA was going to change my life.”

Once the decision was made, Jones was excited, but worried: “Coming out publicly for a current or professional athlete was known and feared as an endorsement suicide. I gave my sponsors a chance to bail on me, but none of them did.”

The golfing attitude among professional circles always had been one of a “good ol’ boy” nature. On the LPGA, it was a sort of “don’t ask, don’t tell” policy, as the tour never really wanted to deal with the potential of becoming known as a “gay tour.”

Jones feared a backlash, but encountered plenty of open-minded people who cared more about her ability as a golfer, and less on her sexuality. In fact, she even picked up a couple of new sponsors.

And how! The announcement of the Olivia endorsement deal was made in March 2004. After 22 years on the LPGA, ready to retire, Jones made a surprise return to the tour, proudly wearing Olivia’s name. That relationship has blossomed into a new venture, providing her with a new outlet for her passion for golf.

“Since my retirement in July 2006, I have developed a company with my partner, Carrie Sexton, to take women on golf vacations,” Jones explains.

The couple met through a friend of a friend in New York, but call Georgia their home now.

How does Sexton deal with her partner’s stardom?

“There are perks and difficulties. I forgot I was a superstar,” Jones jokes. “But we have a fun time, and she is easy to be around. She is a working partner, too.”

According to Jones, “Each getaway is destination-focused. They play off the flavor of the place, and what attracts people there. The trips are timed so we are there during golf events.”

Indeed, this year golfers of all levels have the option of traveling to Scotland; the United Kingdom; the Blue Ridge Mountains in Georgia; or St. Augustine, Florida.

Jones adds, “We have clinics and introductions, and one-on-ones. We all get together as a group, and we employ teaching pros as well. It is like a fantasy camp with real people, each with different experiences and great stories.”

Not being a golfer myself, after speaking with Jones, and hearing the joy in her voice as she talked about her life playing the sport, I was humbled by her commitment…I mean, 25 years, and still going strong!

I came to see the sport in a new light, as Jones told me, “Golf is a great game for people of all levels. You put men and women together, and they extend business relationships. You learn about them, their lives. You put people of all different levels together—some retired, some new to the game, some who are gung-ho and want to learn—and something unexpected happens. Friendships are built, bonds are formed, and you bring people together. I learned much in life, but I did not imagine I would use golf in all parts of it. I want to share this, and spread it to all people who play the sport.”

You can find out more about Rosie Jones Golf Getaways by visiting www.RosieJones.com.