The musical that spoke to a generation is coming back to Minneapolis for another memorable la-vie-bohème moment. Written by playwright Jonathan Larson, who died just before the show premiered Off-Broadway, Rent has done more than endure the AIDS epidemic of the 1980s and early 1990s. It has given a voice to the generation lost to the world, and thrived for 12 years, making it the seventh-longest-running Broadway show in history. It has shown itself to be more than a one-song-glory musical fad. 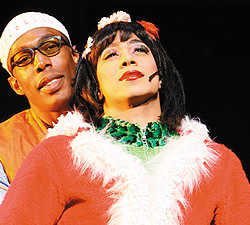 With original Broadway cast members Adam Pascal, Anthony Rapp, and Gwen Stewart, along with Michael McElroy, who began playing Tom Collins in 1997, Rent will be back at the Orpheum starting March 25.
With a take-me-or-leave-me-attitude, Rent has played throughout the Twin Cities for eight times including this performance.

Lavender recently spoke with McElroy about Rent, past and present.

Jonathan Larson wanted Rent to be Hair for the ’90s, and bring musical theater to the MTV generation. That generation has grown up. How do you think Rent works for the new generations?

I think it’s still doing that. I think we’re past the MTV generation, but we have a whole new generation of teenagers, and it speaks to them. I think it bridges the gap between those who were in their teens and early 20s then, and now those who have kids. It’s a bonding thing between them.

With HIV now considered a “controllable disease,” do you think the message of Rent has changed or become outdated?

No, I don’t think it’s the same, and on one hand, it’s great because we have these medicines that are prolonging life. I came to New York in the early ’90s, when it was still hitting hard. I saw it firsthand. I had friends I was in shows with who were no longer there. It’s still fresh in my mind. Now, you have a generation who doesn’t have that perspective. It’s not the same experience for them. HIV was a death sentence. Now, it’s not the case. Now, it’s not considered as big as a deal.

You started playing Tom Collins in 1997. Has the way you played Tom changed over the years?

It has changed. I was in the middle of a relationship at the time. Now, I’m single. So, the fallout of that, and being a single person in NYC and around the world, has changed my perspective, and playing this role has taken on a lot more value. We take things for granted, and once they end, we see that. Tom gets to run the whole gamut of the relationship. My perspective on it has changed. I have a richer and deeper perspective based on my experience.

Rent came out, and blew away audiences with its boldness and message of acceptance and living life. Now, there are plays like Spring Awakening, which has been revised as a modern musical recently, that take on the young and outcast along with sexual exploration. Do you think Rent laid the groundwork for such plays to be successful?