It has been 14 years since the death of Jonathan Larson, as well as the Broadway launch of the landmark rock musical he left behind. RENT, for which he posthumously won the Tony Award for Best Musical and the Pulitzer Prize for Best Play, resonated with a younger generation, because of its direct portrayal of queerness, interracial love, economic collapse, addiction, and HIV/AIDS. It signified, despite conventional market wisdom, that mainstream America was not only willing but also hungry for a juicy inquiry into these subjects. 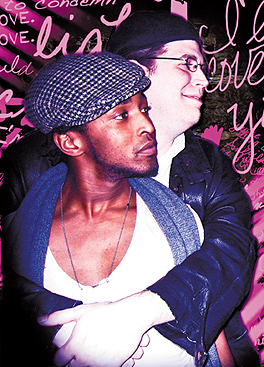 RENT, a hip reimagining of Giacomo Puccini’s opera La Boheme, went on to run for 12 years, making it the eighth-longest-running musical in Broadway history. The terrific 2005 film version, despite mixed reviews ranging from glowing to negative, since has found its niche as a cult classic.

In the rock sensation’s farewell tour 11 months ago, original stars Adam Pascal and Anthony Rapp played the Orpheum in Minneapolis. The night I attended, the audience went wild! Some criticized the two stars for being too old for the roles more than a dozen years after they premiered them, but for the audience, the experience was utterly visceral, and for some, downright hysterical.

However, a new generation here in Minnesota is discovering RENT for the first time, not as an audience, but as the ensemble that actually performs it. Cardinal Theatricals has found a way into the script that cuts right to the jugular of Larson’s deepest-held vision of what the musical is all about. Director Andrew Rasmussen’s actors have made their marks individually in local bands, and some have been homeless—something RENT’s characters must take a stand against.

Rasmussen says, “The show seeks a raw kind of talent, and lends itself to people from nontraditional venues,” adding, “The show has amazing themes of friendship, community, and hope.”

Kinaundre Williams, of 2 Tone Runts, who plays Angel, notes, “This is my first time doing drag, so the costume is part of the battle. Also, it’s been cool getting to know the type of character Angel is. She’s cool, caring, kindhearted, giving. And each day, she literally lives to the fullest.”

RENT challenges Williams because the performer has relatives living with AIDS.

Lorin Yenor, who portrays Tom Collins, admits he had some inhibitions about the kissing involved, but shares, “Andrew, just by his tone, helped ease those nerves. And I got to know our Angel pretty well by working with [Kinaundre] in St. Cloud, because we carpooled out there. Getting over that shyness was great. Our relationship has become very natural onstage. I love the fact that we are as comfortable with each other as we are.”

Indeed, that comfort level and intimate vulnerability make for passionate theater. Sounds like Rasmussen is onto something by casting actors who are unafraid to get to know one another, and who bravely draw from their own edgy experience outside the mainstream to make RENT the show it’s meant to be.