Emmy nominee and Guthrie Theater veteran T. R. Knight is paying a visit to his hometown on October 13 to perform in a benefit featuring an adapted script reading of The Laramie Project at The Woman’s Club of Minneapolis, preceded by a candlelight ceremony across the street in Loring Park. Other actor/readers include Beth Gilleland, Buddy Haardt, Emily Gunyou Halass, Bill McCallum, Suzanne Warmanen, and Claudia Wilkens. Peter Rothstein directs. Songwriter Randi Driscoll will perform What Matters, which honors Shepard’s memory and his family. 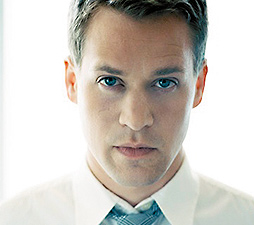 Proceeds from the benefit go to the Matthew Shepard Foundation and its Campaign To Erase Hate to commemorate the 10th anniversary of the gay University of Wyoming student’s death. The powerful Moises Kaufman play examines community reactions and attitudes regarding homophobia and the torture/murder of the 21-year-old gay man that shook the nation.

Openly gay Knight, known globally for his role in the hit ABC series Grey’s Anatomy, is a devoted admirer of Shepard’s mother, Judy. The actor had an extraordinarily successful stage career in the Twin Cities in his late teens and early 20s.

I spoke with Knight about the benefit and his formative years in the local theater scene.

What compelled you to take this reading on?

What calls your heart to do this?

I saw The Laramie Project twice in its original production when it was in New York. So, I’m familiar with it. The Matthew Shepard Foundation is such an important foundation. It fights basically for gay rights, but also for everyone’s rights. The Erase Hate campaign hits all groups. It’s not just one specific group. I admire beyond belief what Judy has done. And this being the 10-year remembrance of Matthew’s murder, it’s a way to remember and a way to raise money for her foundation. We are so lucky to have people like her walking this Earth. Basically, anything she would want me to do, I would do.

A lot of people here in Minnesota are very proud of you and very impressed with your success. Tell me something about how Minneapolis shaped you as and actor.

I grew up in Minneapolis. I moved when I was 25. I’m not a pedigree actor. I very much learned on the job, through private study and through working on plays, and from directors and fellow actors who would take me under their wing. I’m very grateful for that. It’s such an excellent theater community, and I found it when I was there to be very welcoming. I studied with Kent Stephens. Jaq Bessell, who was working at the Guthrie, I studied with. And also just working actors, whether it was at the Jungle, or Chanhassen [Dinner Theatres], or the Guthrie. Luckily, I was able to work with some really good people.
One role that really blew local audiences away was your Mozart in Amadeus at the Guthrie. That was a breakthrough role for you. I thought you were better than Tom Hulce in the movie.

Well, that’s very kind of you, but I totally disagree. He was amazing.

Yes, he was. But I thought you had a better historical sense of the period and style, while still being so totally free and released in that part.

That’s one of the roles you want another shot at. It’s so odd, because it’s so melodramatic at times, and at other times it’s so very small. It’s not the easiest role. It’s one of the things I guess you’re never satisfied with. But I certainly learned such a huge amount when I was playing that role.

What play did you do at the Jungle?

Oh, God, yes! The World War I play. That was terrific. A beautiful show.

Bain [Boehlke] was one of those wonderful teachers. He was directing it, and also acting in it. Just working with him was a master class in itself. And there were other actors along the way.

I remember when I auditioned for Brighton Beach Memoirs at Chanhassen, directed by Allen Hamilton, which was one of the first plays I auditioned for as a young adult. I think I was 19 or something like that. The actress, Barbara Kingsley, was auditioning for one of the roles in it, and after her audition, she came out, and she saw me. We knew each other, and she took me aside, and started working with me on my audition. She was so wonderfully giving. Normally, actors are so consumed before an audition and afterwards—and I include myself in this—consumed by what you are going to do, and afterwards, consumed about what you did and what you could have done differently. And Barbara was so open and so giving that she would take her time and her energy, and help out a young actor. I’m sure I had no idea what I was doing at all. And I got the role, and in no small part, it was due to her.

I recently reviewed Michelle Barber, known for her Chanhassen work, in an edgy Elvis Costello piece at the Southern, The Juliet Letters. And she really made a breakthrough last year in Pen at the Guthrie. She’s flowered into a new level of artistic power.

Michelle has? She’s great. I think I’ve known her since I was about 5.