You may think our rainbow tribe is divided into five parts—GLBT folk, as well as our allies—and, if you do, you’re right, kind of…but the quantifying that matters most is composed of a simple binary code: You’re either one, or you’re the other. I’m talking, of course, about Cat People and Dog People. 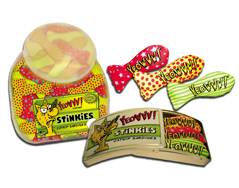 Two products of some interest to each of these groups have crossed into Lavender’s gaydar, and it falls upon me to relay the facts of these to you, our animal-loving readership. Naturally, as a highly professional Lavender contributor, I’ll maintain my own highly professional objectivity: First, I’ll describe something for the feckless, faithless, fur-shedding quadrupeds known as cats; then, I’ll offer something for the favorable, faithful, and fair-minded friends we all know and love as dogs.

Everyone understands the symbiotic relationship betwixt the feline of the species and Nepata cataria—“catnip” for the Latin-impaired. Catnip is a bright, shiny object for the puss-centric proboscis, inspiring delirious fits of kitty rolling, kitty pawing, and kitty frisking as it’s bruised—the catnip, I mean—not the proboscis.

Sardines, meanwhile, often are considered something of a caviaresque delicacy for cats. So, stuffing catnip into a pillowy container shaped like a giant sardine is the feline equivalent of a Reece’s peanut butter cup—two great things that go great together.

Enter the Duckyworld Company, which has unleashed upon an unsuspecting populace Yeowww!® Catnip, where presentation meets preparation. See, these faux fishies, stuffed to the gills with feline pheromone stimulation, are three inches long, allowing for easy chomping. They come with such natural-seeming designs as stars, stripes, and dots for the owner whose attention span is as short as the cat’s.

While our cat product is all about attraction, the dog product centers around the theme of repelling—that is, of fleas, ticks, gnats, mosquitoes, and other six-legged insects of vampiric inclination.

Doggie Diva Kathy Santo, veteran of The Martha Stewart Show, among others, founded her own company, Everyday Pets, which specializes in potions meant to accentuate the lives of Man’s Best Friend. Of particular value is the spray whose title is rather self-explanatory: Defeat Da Fleas.

While the health and comfort of one’s canine companion is reason enough for most dog owners to prevent their pet’s epidermis from becoming O’Hair International Bugport, a lamentable side effect of infestation is that bloodsucking bugs tend to be as fickle as Liz Taylor on a bender, jumping from the dog’s skin onto the owner’s other pets, as well as pet curtains, pet furniture, and pet rugs

“When your dog comes in,” the Gang at Everyday Pets supposes, “you want him to come in alone!”

Defeat Da Fleas stands out from its more traditional brethren in that its list of ingredients—and “ingredients” is exactly the right word—reads more like a particularly ambitious mixed drink sans alcohol. Specifically, distilled water is combined with citric acid and peppermint leaf, among others. They commingle to produce a froufrou aroma that’s as pleasing to the noses of humans as it is displeasing to those of fleas, ticks, and other hemoglobin-hungry pests. (Because the dogs in question drink out of the toilet, and eat their own poo, they don’t get a vote.)

Use of either of these products is guaranteed in some measure to lighten your best friend’s carbon pawprint, as each is organic.

Of course, “organic” is term bandied about so often that its meaning nearly has been lost from re-re-re-use. What it means in this case is that Yeowww!® Catnip (can you believe some high-priced lawyer actually registered the copyright?) and Everyday Pets Defeat Da Fleas Repellent Spray (can you believe some high-priced ad agency actually came up with “Da Fleas”?) both have been certified formally to be free of harsh chemicals and harsh modifications.

This certification is part of a larger green-going trend that makes for a healthier pet, a healthier owner, and a healthier planet. Subscribing to this trend well may be the most important thing upon which Cat People and Dog People ever agree.