Reagan and AIDS, and the Disease in Africa: An Interview with Thom Hartmann

Air America’s Thom Hartmann widely is hailed as one of the nation’s smartest radio talk show hosts. His devoted fans in the GLBT community love it when, as a straight man, he takes on homophobes, and destroys their arguments oh so civilly on national airwaves. Indeed, he has been in top form recently with bigots who have phoned in their antigay views about California’s Proposition 8. 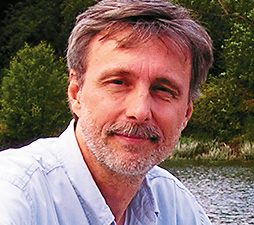 However, Hartmann’s great contribution is his learned examination of President Ronald Reagan’s economic legacy. His classic analysis, Screwed: The Undeclared War Against the Middle Class, looms as a seminal text in demystifying the Reagan cult, which still holds the GOP in thrall.

But, what about Reagan’s controversial record on AIDS? I asked Hartmann about that just after the recent election.

Ronald Reagan is widely remembered in the GLBT community as being in denial about the AIDS epidemic—very negligent, not even willing to say the word “AIDS.” You’ve been an eloquent critic of the Reagan legacy, so I’ve been curious about your thoughts on his lack of an AIDS policy.

I think that during the Reagan Era and the 1980s, to the extent that Reagan was conscious—because I really believe his last two years as President, he had full-blown Alzheimer’s—he wasn’t there, and for all practical purposes, [Vice President] George H.W. Bush was running the country.

But, early on, AIDS was seen as a gay man’s disease. And in the very early days, it was believed that it had to do with people using poppers—amyl nitrate—and things like that. I remember all the speculation and the freak-out.

I think that Reagan’s personal homophobia and the entrenched homophobia in the Republican Party, to some extent, played a role in their ignoring the gathering storm, and ignoring the scientific evidence, the public health authorities, and certainly the voices in the gay community.

But even beyond that, there was the hubris of the Republican Party itself that we’ve seen since Nixon—when Nixon decided to reach out to the Southern racists, and take them away from the Democratic Party after LBJ [President Lyndon Baines Johnson] signed the civil rights legislation. They would cater to small special interest groups, basically, racists, gun owners, and the hard religious right, and punish or totally ignore other segments of American society, such as the poor, gays, people who were lacking in educational opportunities, and union workers, in some cases, actively working against their interests, because they viewed them as constituents of the Democratic Party.

And this whole Lee Atwater idea of the continuous political campaign—that you didn’t have a campaign and have a presidency, but you had just an eight-year campaign, always preparing for the next campaign. And the idea of one-party rule that came to a head with Karl Rove and George W. Bush actually believing they had finally established single-party rule in the United States, which, of course, was the goal of [Nikita] Khrushchev in the Soviet Union.

I think all of that played into it. There were these bizarre political crosscurrents that produced a public health disaster, and I think that they’re producing other health disasters as well. Tuberculosis is the fastest-growing disease on the planet right now.

You’ve spent time helping refugees in Africa. Tell me a bit about what you’ve observed about AIDS there.

We started a program there: Salem Uganda—visit www.saleminternational.org—and during the first five years or so of that program’s existence, and the two years that I was there, on and off, it was a refugee center, and we were dealing literally with famine and the consequences. [Dictator Idi] Amin’s men were killing all the cattle, murdering all the men as they went north, raping most of the women.

So, we had all these women and all these little babies, and no food. That refugee center and famine relief program laid in the early ’80s [became] by the mid-’80s a hospital to treat initially diseases [derived from] malnutrition and, very quickly, AIDS.

Then, as the government started to stabilize, and other agencies came in to deal specifically with AIDS, we reinvented the organization once again to deal with the orphans and the widows of the AIDS epidemic.

You’ve been magnificent in countering homophobic attacks on same sex marriage from callers to your radio show, especially since the passage of Prop 8 in California. I love how you recently countered a man who feared same sex marriage would open the door to and polygamy and other things.

(sardonically) Like sex is a gateway drug that will ultimately lead to man on dog sex. Ultimately we have to take this down to a fundamental cleavage between choice v. biology. I don’t think that there’s any doubt that people can choose to have two or three or four wives. Fact of the matter, in America today, half of marriages fail. Perhaps even a majority of men have had more than one wife. They just did it serially rather than in parallel. We have serial monogamy. That’s a choice: how many wives you’re going to have. It’s a choice that’s outside the bounds of what’s legal in the United States. To do it in parallel -all at the same time- that’s polygamy.

But a person’s sexuality, based on not just all the scientific evidence that’s been able to be gathered, but perhaps more importantly, just common sense and empirical evidence, a person’s sexuality is something that they’re born with. It’s not a matter of choice. If we established at the founding of this country, although it has been acted out imperfectly -for example: blacks and women were not included- nonetheless, we established the idea that we are all created equal and that we all have equal rights, then those things you don’t have a choice over at birth -Barack Obama’s middle name, the color of a person’s skin, their sexual orientation- those are things that we should have a complete and absolute consensus that we will not discriminate on the basis of if we call ourselves a civilized society. And I think there’s a strong case to be made, and I believe it to be a fact, that that includes sexual orientation.

So when people say things like the Rick Santorum (former Republican US Senator from Pennsylvania) argument that if you acknowledge and legalize gay marriage that it is going to lead to a whole spectrum of things from polygamy to pedophilia to quote Rick Santorum: ‘man on dog sex’, is absurd. Because those things represent either choices, in the case of polygamy; mental illness in the case of pedophilia; and I don’t know if bestaility is a choice or a mental illness (laughing). I don’t know frankly. You’ll have to ask the guy who was the head of the anti-abortion movement who went on Alan Colmes’s (Fox Network) show and talked about having sex with donkeys: Neal Horsley. But it’s not something that people are born with. So if we’re not going to discriminate based on the color of a person’s skin, we should not discriminate on the basis of sexual orientation. It’s just a very simple principle.

What are your thoughts on the conservative assault on sex education and antibullying programs? There’s scapegoating that opponents of those things indulge in. How do you see the new Obama administration and the increased Democratic congressional majority dealing with this?

Much of the scapegoating of sex education is by people who are basically neurotic and very often takes the form of: ‘Look out! They will try to convert your children to become gay!’ Which is their understanding of simply teaching people that there are people out there who are gay and that they are our brothers and sisters too. And that we should be tolerant of them or even beyond that, that we should embrace them. They’re part of the human family. They’re our brothers and sisters. So for people like Anita Bryant, it gets their panties all in a wad. It get’s them all flipped out and they can’t deal with it. And that’s homophobia and frankly (it’s also) sexual phobia, sexual repression, and sexual neurosis. The remnant of Victorianism that has infected the United Kingdom, Ireland, and the United States, but not continental Europe. They never had to suffer under the reign of Queen Victoria. It still echoes through our society and reaches its ascendancy  and its peak, under the current George W. Bush administration and their war on sex education. Frankly, I think the Obama administration, (will be) a pro-life administration.

How’s that? I know you don’t mean that in the conservative sense.

That is to say, wanting to make sure that Number One: the number of legal and safe abortions is minimized. Number Two: the number of children adopted is maximized and Number Three: in order to make Number One happen, the availability of birth control and the widespread dissemination of knowledge about how our bodies work, based on human biology, which is available will be done. The fact of the matter is when you look at most Western European countries, where sex education is just a normal part of of elementary school and secondary school, they have lower abortion rates and out of wedlock birth rates than we have in the United States, simply because they know how to avoid getting pregnant!

They have lower sexually transmitted disease (STD) rates than we’ve got now as a result of a 28 year war on science that’s been waged by the conservatives. We’ve got an epidemic right now in the United States of teenagers, straight teenagers, with oral and anal venereal diseases, because they believe that that kind of sex is totally safe. And if they just avoid vaginal intercourse, they’ve got nothing to worry about. That’s how dumb they are! And you see the pinnacle in the most recent Vice Presidential candidate (Sarah Palin), trotting her pregnant 17 year old daughter out on the stage.

You’ve dialogued with Patrick Buchanan and one of the things that gets to me about him and other nativist right-wingers is when they squawk about the primacy of the English language. Yet they’re not the least bit interested in the great works of English or American literature. The nativist crowd has likely never bought a ticket to a Shakespeare play. But I’ve heard Buchanan actually tout Shakespeare periodically. As does his fellow conservative, Bill Bennett. But Shakespeare’s writings are filled with sexual and gender ambiguity. It’s not just some late 20th Century gloss to say that such ambiguity infuses his writing. It’s inherent and that aspect of his writings has been controversial ever since his own time. It’s ironic that those who push the ‘English Only’ culture have disregard and even contempt for Western literature and major works of the English language.

Yes. I don’t disagree. It’s also during Shakespeare’s time that all they women’s roles were played by men in drag. I don’t know the significance of it and I suspect that it has probably more to do with men controlling property than anything else.