Raze: A Salon with Some Barbershop Ambience

The time finally has arrived that men no longer must walk into a women’s salon, and feel out of place. Nor does he need to sit in uncomfortable chairs, flipping through the latest edition of Seventeen, and wondering why on Earth anyone actually would read that magazine. Instead, Raze is a place where men can feel comfortable while getting a haircut.

Up to the 1970s, the barbershop was where men went to talk, and get their hair cut. There, men could be men, and barbers knew what they were doing for men. But times changed—barbershops didn’t keep up with new styles, and men who wanted more started to frequent salons, once a woman’s domain. 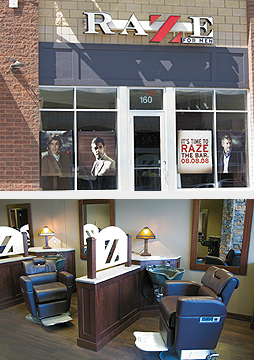 “Guys felt more comfortable with a full-service salon, and that’s where we are today,” according to Regis International Creative Director Gordon Nelson.

Today, 30 years later, salons see just as many men as they do women, but still cater to the latter. The magazines found there are meant primarily for women, with possibly one GQ or Time magazine buried in the stack.

Regis, one the largest companies in the hair-care industry, took notice.

As Nelson shares, “We thought, ‘What could we do that we would do different?’”

Though Nelson knew that unless you like the haircut, you’re not going to come back, he also realized the environment would bring in male customers.

“We used more traditional barbershop elements. We wanted to bring it back to the one unit, one area that it used to be.” Nelson notes. “Guys may feel uncomfortable doing things like eyebrow waxing if they have to move place to place.”

If $1,000 days and more than 60 percent scheduling for repeat business is a sign, then Regis has tapped into a market that was ripe with Raze.

Regis chose a location—6001 Shady Oak Road, Minnetonka—that seemed rather risky for a new business with no name recognition.

However, as Nelson explains, “It has to work as a franchise business. If it doesn’t, we don’t have a brand. In order to grow, you need franchise and corporate growth. If you can’t do a strip [mall], it won’t work. The reality is that most of America is organized by strip centers, and we draw from a six- to ten-mile [radius], and not much beyond that.”

Nelson adds, “If it had been from a fashion point of view, we might have just opened in Downtown [Minneapolis]. Being here allows us to say, ‘Here is our location. This is the business we are doing.’”

As nice as the concept may sound, the real question is why someone should switch from his present salon to trek to Raze for his haircut.

Nelson points out that guys who are shelling out $40 for a haircut at a woman’s salon now can head over to the new men’s salon where they only pay $30. Plus, they get sports TV and men’s magazines, plus access to a Mac and wireless Internet to keep connected to work or for fun.

In Nelson’s words, “He’s not paying more, but less.”

With all this talk of a salon for men and only men (though women are welcome), it seemed only logical that Lavender should send a man to Raze to try out the place himself.

From the moment Anthony walked in the door, he was greatly impressed: “I was greeted with more than a ‘write your name down,’ and ‘it’ll be a 15 minute wait.’ They asked me why I was there, then asked if I would like a complimentary drink.”

Next, Anthony quickly was escorted to a chair, where he received a scalp massage, shampoo, hot towel treatment, haircut, and eyebrow wax.

“It was more than I’ve ever had during a haircut,” Anthony enthuses. “I mean, I like to have the clean-cut look, and put effort into it, but never bothered with the shampoo. I think the hot towel treatment was the best. I was offered two different fragments to choose from, and just got to sit and relax for a few minutes. It was great. Of course, she did a great job cutting my hair as well.”

But the real question for Anthony was if he would come back.

So, what will Anthony tell his mate?

As Anthony puts it, “Oh, yeah, I’d definitely tell people to go there. I’ve never been more than the $15 haircut guy, but even I would go back there. The extras really did make it a great place to get a haircut—well worth the extra money to just feel comfortable, and not out of place during my session.”