It’s summertime, so Kevin Jennings’s thoughts turn to…ice hockey. The energetic educator/activist—who steps down soon as Executive Director of the Gay, Lesbian and Straight Education Network (GLSEN), a youth advocacy organization he founded 13 years ago—is a lifelong hockey fan. He grew up rooting for the Boston Bruins. During a three-year span, he  attended every minor-league game in his hometown of Winston-Salem, North Carolina. Moving to New York City in 1993, he became a regular at Madison Square Garden, where the Rangers play. 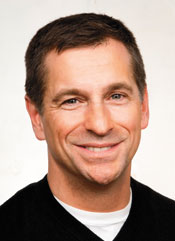 But adults in the stands often sounded as ignorant and immature as the schoolchildren whose behavior GLSEN works so hard to change. Players routinely were mocked as “faggots” and “queers.” A season-ticket holder who tried to incite the crowd with an antic dance was derided as “Homo Larry.” Even the scoreboard was booed, when it briefly flashed the name of the New York City Gay Hockey Association (NYCGHA).

This year, Jennings had enough. As fans near his seat yelled “faggot!” at a Philadelphia Flyer, he confronted them. “Are you really gay?” one asked. “No,” Jennings thought to himself. “This is just a cool way to win a popularity contest in a crowded arena.” But he kept quiet. He didn’t hear when one man muttered, “That’s your problem.” However, Jennings’s nephew—a former college football player—heard the slur. He stared at the homophobe. The man apologized. “Maybe he thought my nephew would kick his ass,” Jennings muses.

In his best teachable-moment manner, Jennings wrote to the Rangers about the incident, and about homophobic slurs at games in general.

“Naively, I thought they would do something,” Jennings explains. But no one responded, so he wrote again. Finally, he received “a blow-off reply.” The Rangers stated they had completed their charitable donations for the year. “That wasn’t what I was looking for,” he relates. “I told them, ‘I want you to educate your fans.’“

So, the media-savvy GLSEN leader enlisted the help of two heavy hitters: New York City Council Speaker Christine Quinn, who is a lesbian, and Ted Rybka, Director of Sports Media for the Gay and Lesbian Alliance Against Defamation (GLAAD).

In March, The New York Times ran a story documenting the long tradition of gay slurs at Rangers games. It included a response from a Madison Square Garden spokesman that “homophobic or racially or culturally insensitive behavior is unacceptable at any event [here], and we have taken aggressive steps to deal with the offensive behavior of a very small minority of game attendees.”

Part of that statement is true, Jennings acknowledges: The Garden does eject fans who use racial epithets or scream four-letter words. And that makes the inaction surrounding antigay speech even worse.

Jennings had high hopes after the Times story, when Rangers executives agreed to meet with him. But by late spring, still no follow-through.

After all, Jennings is not demanding major changes. He simply wants officials to air public service announcements during games, urging fans to act more respectfully. He also would like the Garden to train its staff on how to intervene with offensive fans. He has offered to facilitate a partnership between the Rangers and NYCGHA.

Jennings is skating on thin ice. So far, none of his requests have been granted.

“I know people are busy, and blah, blah, blah, but the lack of response makes me nervous,” Jennings observes. “The silence for five months after our first contact shows a lack of seriousness. I hope it wasn’t all a smokescreen.”

Nonetheless, Jennings does not believe the Rangers are malicious: “I just don’t think they were aware they had gay fans—or the [straight] fans realized it either. Change is a process, not an event. I’m under no illusion that everything would change if they called today, and said, ‘Let’s meet.’ But I want them to realize that everyone is there to have fun. When name-calling is tolerated, a lot of gay—and straight—people can’t enjoy the game.”

Jennings draws parallels between his work with schools and his outreach in sports, noting, “GLSEN’s mission is acceptance of everyone, regardless of sexual orientation. Sports is another arena to teach acceptance. Sports is where a lot of young men learn how to behave. If they get the message there that it’s OK to be antigay, that’s wrong. Schools can’t do it alone. We need to send the message at hockey rinks, too.”

Like a good teacher, Jennings understands that no issue is black and white—there are always shades of gray. His partner is from Columbus, and when they’re in Ohio, they attend Blue Jackets NHL games. Jennings has never heard “faggot” slurs there. Earlier this year, the couple took 15 nieces and nephews to Nationwide Arena, the Blue Jackets rink.

“I’m not sure I’d do that at Madison Square Garden,” Jennings remarks. “I don’t want to send the message that I’m comfortable in an antigay environment, or that that atmosphere is acceptable.”