Screen Shimmering Glimpses of the Past and Dreams of the Future

The fifth annual Queer Takes: Alt Families film series at the Walker Art Center has an expansive feel. It gives us images not only of where we’ve been, but also of how we are reinventing ourselves in social reality with alternative families and more dignified approaches to aging. This year’s focus is clearly in step with current pressing issues.

Curator Dean Otto, who scouted so that these films would reach Minneapolis, says the selections “relate to the idea of families and alternative families, and people wanting to have a more traditional recognition of their families through marriage equality or other things. That was a strong theme within the work I was seeing this year, and that’s what informed my decisions.”

Otto shares, “I was really moved with the story of how Candy’s chosen family stepped up when her biological family failed her.”

Jeremiah Newton, producer and dear friend of the transsexual icon who died at age 29, reflects, “Candy Darling was an icon for so many artists living in New York City during the late ’60s and early ’70s: artists such as Tennessee Williams; Tom Eyen, playwright and author of Dreamgirls; Andy Warhol, who used her in two of his most popular films; Lou Reed, who wrote about her in ‘Walk on the Wild Side’ and ‘Candy Says’; Salvador Dali, who considered Candy his ‘muse’; silent screen actress Gloria Swanson; and the B-Movie Queens, Gloria Grahame and Veronica Lake. All these people and so many more idolized Candy, and wanted to be her friend, and watch her perform in one of the many off-off Broadway shows she performed in. She was truly unforgettable, and Beautiful Darling brings her back for the last time to the silver screen.”

Aging and long-term lesbian love, along with dance partnership, infuse Edie and Thea: A Very Long Engagement (June 10). New Yorkers Edie Windsor and Thea Spyer were engaged for 43 years before gaining the right to marry. Through political battles and illness, they’ve remained true to one another and an inspiration. Directors Susan Muska and Greta Olafsdottir shocked us with 1998’s The Brandon Teena Story.

Otto points out that French director Sebastien Lifschitz’s Going South (June 11) is a “story of how queer people form new relationships when their families fail them. It was one of the Berlin Film Festival’s hottest tickets.”

Going South is controversial for its hot sexuality and hot bodies. But everyone seems to agree that it has a deeply sensitive lens toward childhood trauma.

In addition to the three Queer Takes films, Last Address is at the Walker through June 30. Some of the artists recounted are Keith Haring, Reza Abdoh, Peter Hujar, and Felix Gonzales-Torres.

Director Ira Sachs made the short film, in his words, “because now that I’m in my 40s, I realize even more how I’ve had no mentors, so few models even, for how to live a creative life as a gay man, and how I’m winging it on my own.”

Moreover, the Walker’s captivating 1964 exhibit (through October 24) features art by gay icon Warhol, including his signature Brillo box and his haunting take on President John Kennedy’s assassination, along with short films about the artist that include homosuggestive moments.

As well, enjoy queer videos and art at the Love Never Dies exhibit, curated by Jim Dryden and Howard Oransky, which was organized by the Walker and Form+Content Gallery. Screenings are at the latter venue through June 27. 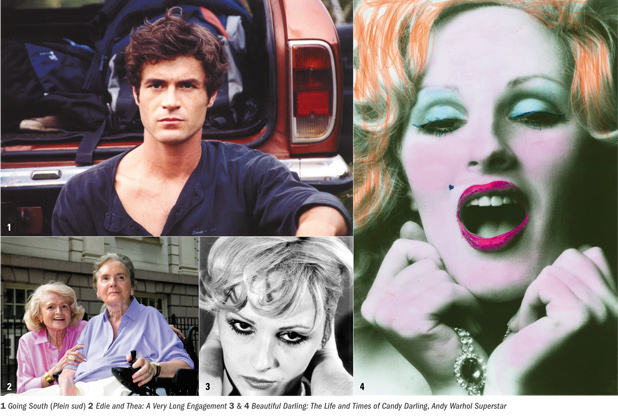