Minnesotans Travel to Iowa To Get Married—Legally

With the April 3 Iowa Supreme Court decision allowing same-sex marriage, many Minnesotans made plans to travel a few hours to Iowa to get hitched—legally. Among the Minnesotans applying for a marriage license on the first day they could do so, April 27, were Dean Schlaak and Tom DeGree, co-owners Wilde Roast Café, who lined up at the Polk County Courthouse in Des Moines. On May 3, All God’s Children Metropolitan Community Church in Minneapolis sent a busload of couples to Iowa to take part in individual wedding ceremonies of their own. 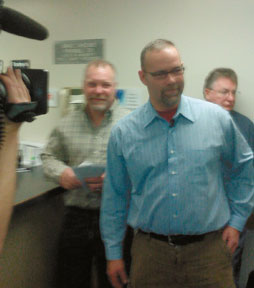 With Minnesota’s ambitious plan to end long-term homelessness by 2010 growing more difficult with the failing economy, volunteers are hoping to shed some light on the increasing problem plaguing our state and the country. Volunteers with Hennepin Avenue United Methodist Church set up cardboard-box homes on April 17 to show support for people forced to live in make-do places like cars or boxes. The Minnesota Coalition for the Homeless points out that 1,000 Minnesotans are turned away from emergency shelters every night, and forced to find makeshift homes. For more information on the homeless problem in Minnesota, visit www.mnhomelesscoalition.org.