Project 515, in its never-ending struggle for equality, proposed the Final Wishes Bill on January 22 during a news conference, explaining what the bill is intended to do for committed same-sex couples.
The legislation would honor the final wishes of partners; preserve their homes for their families; and seek justice after a wrongful death. In essence, it would give same-sex couples the same rights as married couples at the time of death. 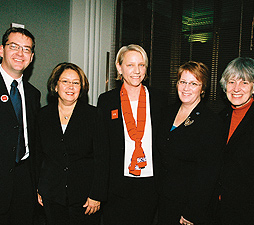 Senator Yvonne Prettner Solon (DFL-Duluth), who will author the bill in the Minnesota Senate, said, “Most Minnesotans from across the state expect our laws to treat people equally, yet 515 of our laws fall short. Changes to current state law are necessary to ensure equal and fair treatment for all Minnesota families.”
A survey conducted by Decision Resources found that Minnesotans value fairness: 8 out of 10 believe the government should not treat people differently because of their sexual orientation; and nearly 70 percent believe “gays and lesbians should have the same rights and responsibilities as everyone else.”