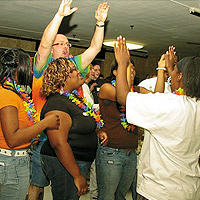 Pride Fruit Bowl Draws Nearly 350 People
The first annual Fruit Bowl took place June 27 at Elsie’s Bowling Alley in Minneapolis. This alcohol-, tobacco-, and drug-free event was a collaboration of Rainbow Health Initiative (RHI), Tobacco-Free Lavender Communities, Neighborhood Involvement Program, and Pride Institute. It reached nearly 350 people throughout the GLBT community, including individuals in recovery, youth, and families, as well as those who just wanted an alternative to the bar and party scene on Pride Weekend.

RHI Community Outreach Coordinator Ryan Li Dahlstrom said one participant gave the following feedback: “This was the best kickoff to Pride I’ve had in 20 years!”

Look forward to the second annual Fruit Bowl during Pride 2009. For more information on the event and RHI, visit www.rainbowhealth.org.

Rainbow Families Moves to St. Paul
On top of all the exciting news recently regarding Rainbow Families is another update. On August 1, the organization moved to a larger space in the Griggs Building in St. Paul. Earlier this year, Rainbow Families merged with the national Family Equality Council to ensure a strong future. 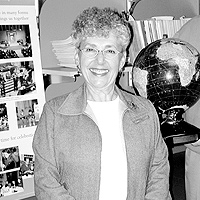 Schloff curated more than a dozen critically acclaimed exhibits at JHSUM, including Unpacking on the Prairie: Jewish Women in the Upper Midwest. It won several awards at the American Association of Museum Conference. A traveling version of the exhibit toured the Upper Midwest for five years.

JHSUM Executive Director Katherine Tane said, “We owe the strength of our archival holdings to Linda’s remarkable vision for collecting the stories, artifacts, and photographs of Upper Midwest Jewish life. We face the future with excitement, as we build on our strengths, and continue to serve our members, scholars, and community at large.”