With a growing fan base in the Twin Cities, local band Sick of Sara has booked one of their most notable gigs to date. Olivia Cruises has scheduled the group as an ongoing act starting in November and going through next April. The cruise line promotes itself as the premier travel and entertainment company for lesbians. 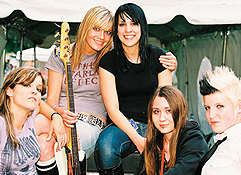 Catch Sick of Sara before they set off cruising: in Mankato on August 1, or at their CD release party August 8 in Minneapolis. For more information, visit www.myspace.com/sickofsarah.

With Pride over, the Twin Cities Gay Men’s Chorus (TCGMC) looked toward its next big event, GALA Festival VIII in Miami, Florida. With the help of Executive Director Jon Lewis, the chorus was able to partake in a weeklong festival that gave mass choruses, guest artists, and everyone there an opportunity to share in some of the “classics” from the GLBT choral movement.

The festival was held in the Adrienne Arsht Center for the Performing Arts, a brand-new venue beautifully designed and equipped with state-of-the-art resources allowing TCGMC and all involved to perform in the highest-artistic-quality space. More than 130 choruses and ensembles were scheduled to participate.