Putting the “T” into Athletics

If Jesse Ream has her way, terms like “men’s sports” and “women’s hoops” one day will seem as archaic as leather football helmets and basketball bloomers do now. Everyone who plays sports is an athlete, according to Ream. Separating them arbitrarily by gender is unfair and close-minded. 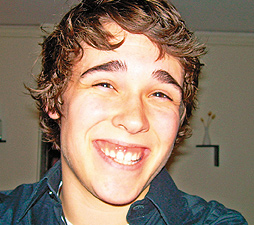 Instead, Ream believes, athletes in all sports should compete against those with similar physical dispositions. Small-framed, less muscular people should play others who look like them, and so should bigger, brawnier folks.

For millennia, “male” and “female” have been the defining criteria. Ream holds that in the 21st Century, those distinctions no longer apply.

Ream should know. Because she moved often—from Florida to Chicago, Colorado, and Connecticut—sports anchored her life. Though biologically a girl, she played in a boys basketball league from age 5 through 11. When she joined a girls league, she continued to play as rough as a boy. Suddenly, the referees called fouls. For the first time, she realized the vast differences between boys and girls.

Ream now identifies as transgender or genderqueer. Though female-bodied, she usually passes as a man. Since age 3, she has been called Jesse, not Jessica. She wore her brother’s clothes, and played with his friends, but no one cared. She has no pronoun preference, advising people to use whichever words feel most comfortable to them.

“Sports was the one place I could act publicly the way I wanted to act,” Ream says. “It was where I could have masculine traits, work out, be physical and successful.”

Ream poured her life into sports. Though basketball, cross country, field hockey, BMX racing, and track took most of her time through high school, at Mount Holyoke College, she discovered ice hockey.

Ream never had skated, and scarcely had seen a game, but when a friend brought her to one, she was thrilled to see players, in her words, “clad in armor, bashing each other. It was oxymoronic—beautiful to watch, but everyone was encouraged to use their bodies physically. There were very few fouls called. It was the way I wanted to play.”

So, Ream did. She joined the club hockey team, and found a home. She was delighted to discover another out trans person on the team. Soon, a transsexual joined. Following their example, she explored an area of sexuality she always had felt subconsciously, but knew little about.

“I’m not really butch,” Ream explains. “I like fashion. I like to cook. I don’t own a truck. I don’t fit any of those awful stereotypes.”

By the end of sophomore year, Ream was reading voraciously.

“I finally had a word for who I was,” Ream relates. “It was an overpowering feeling, much stronger than when I had come out earlier as bi. Bisexuality is about relating to others. This was about who I am. Gender differences are a lot harder to deal with than orientation. There’s still a lot of transphobia around. But I realized it’s not a sickness. That was really empowering.”

Despite her empowerment, Ream realized that sports—the most important area of her life—was no place to deal with transsexuality. Even Mount Holyoke, an all-women’s school suffused with gender awareness, refers to its “women athletes.”

“Sports is so segregated that way,” Ream notes. “Alumnae are so proud of their ‘women’s teams.’ But they’re not all women!”

Which raises the question: What to do with “women athletes” who don’t identify as female?

Writing for the school newspaper, Ream argued that gender should be removed from all sports.

“Most people would rather be called an ‘athlete,’ not a ‘woman ice hockey player’ or ‘male runner,’” Ream states. “I think, with the onset of transgender and transsexual players, we have the opportunity to reexamine how we define sports.”

Ream asks: If wrestling can allow males and females to compete against each other—categorized by weight, rather than gender—why can’t all sports?

“Maybe we’re separating athletes the wrong way,” Ream muses. “We could do it not by genitalia, but by hormonal disposition. There could be three groups: those with more estrogen; those with more testosterone; and those who are transgender, intersex, or even going through puberty. It should be about how you put on and keep muscle, not a strict binary.”

What are the odds that will happen?

The next best solution is changing the language of sports.

“Forget ‘women’s team,’” Ream remarks. “Let’s just call everyone ‘athletes.’ After all, that’s what we are. I think that’s feasible.”

What advice does Ream—who found a home in sports—have for transgender people still figuring out where home is?