Interview with Marsha Norman
Marsha Norman often is regarded as America’s greatest living woman playwright, but she’s also one of the greatest living American dramatists of either gender. Her work stands toe to toe with male greats like Tony Kushner, David Mamet, and Sam Shepard. 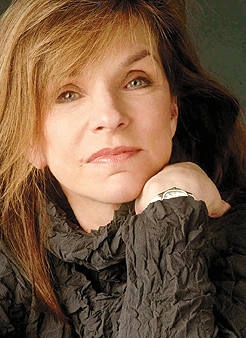 For the Guthrie Theater, Norman has adapted Minnesotan Louise Erdrich’s beloved novel The Master Butchers Singing Club into what may be the playwright’s masterpiece, as well as a rival to Thornton Wilder’s Our Town for “The Great American Play.” Under Francesca Zambello’s direction, it enthralls as a towering production.

Erdrich birthed a tapestry of themes in her novel that Norman has woven into dramatic form. One major thread is how hetero protagonist Delphine (Emily Gunyou Halaas) and Cyprian (Charlie Brady), a gay man, struggle with their long-term commitment to each other.

I interviewed Norman before I saw the show, but I can vouch, now having seen it, that the piece is not only a fair depiction, but also an utterly-breakthrough depiction of a straight person thwarted by a partner who cannot integrate his gay orientation fully into his life. Of course, given that the play is set between World Wars I and II, that lack of integration is understandable.

This Guthrie-created new work is superior to last year’s Guthrie-generated The Intelligent Homosexual’s Guide by another Pulitzer- and Tony-winner, Kushner. And the new play’s gay aspect arguably is every bit as compelling.

Moreover, Brady and Halaas are simply endearing. Plus, the make-out scene between Brady and John Catron, both handsome devils, seems every bit as transgressive as what we saw in Kushner’s work last year.

The Master Butchers Singing Club should go to Broadway. It’s even better than the gripping The Scottsboro Boys, which the Guthrie will be sending there.

I spoke with Norman about the gay currents in her new play, as well as gender issues.

Tell me about Cyprian.

He’s gay. He’s Ojibwe. He’s an acrobat. And Delphine has run off with him. She’s the daughter of the town drunk. She’s run off with him after high school just to get away from her father, and they toured Manitoba doing their tricks. He’s really quite a balancing expert. And that comes to mean, in this world, balancing this pretend life of, OK, I’m with this woman. I’m passing for straight.

One of the things I realized is that we needed to know that right off the bat. It’s the mid-1930s when we meet them. We need to see that he’s having to balance what the world will accept at that time and what the world will make difficult for him. So, he has this companion woman, Delphine, to whom he pretends to be married.

Does this take a toll on her?

There’s a line that says: “So, she forgave him his lack of sexual heat, and decided that his desperate need for her was enough.”

She’s not had any experience with sex or love—either one, I think—having grown up taking care of the drunk father. Cyprian’s the guy that wants to be with her. So, she’s made her sacrifices, and she deals with them as the play proceeds.

But his love is true, and so is his need for men. And they ultimately have a conversation where she says, “If you love me, then why do you do what you do with men?” He finally explains, “The feeling that most men have for women, I have for men.” She asks him if it started in the war [World War I], and he says, “Yes, I loved a man in the war, but I’ve always been like this.”

You have a great feminist following, but I have always felt you have a deep and complex understanding of men.

I think I work extra-hard presenting men, because I feel like certainly I’m writing outside my experience. And I think that anytime you write outside your experience, whether it’s The Color Purple or the world of men, you have to ask them, talk to them, so that you get them as they recognize themselves, not as they’re seen from afar.

I mean, those things really interest me as a human on the planet—that work Carol Gilligan did when she tested men and women for meanings of words, where she asked, “What does ‘tender’ mean?” Women would go, like, baby imagery. And men would go, like, “Oh, God! I hit my knee. Or, where that guy kicked me, it’s tender.” That’s really a profound difference in language and a sense of what is.

I am fiercely feminist in terms of making sure that the place of women is represented equally on the stages of America. Last year, only 13 percent of the plays presented in America were written by women. Even though 70 percent of tickets are bought by women, theaters by and large don’t assume that the audience wants plays by or about women. In fact, plays about women are the most successful.

Of all the awards presented last year in the New York world, even though there were 51 productions written by women, there was only one nominated in the writing. So, a group of us got together, and gave our own award ceremony, the Lilly Award. The Lillian Hellman estate gave us the name so fast, we didn’t even have to finish the sentence. But this is something that really needs to be worked on.