Pining For Pride: East Central Minnesota Men’s Circle Puts the “Out” in “Outstate”

Even before this country was a country, Voyageurs trekked through the wild woods of the future Minnesota, trapping and trading, and blazing a trail that would be trod upon by subsequent European generations. So important, so vital is the mark they left that Pine City has erected a 35-foot-tall effigy along the picturesque Snake River’s North Shore. This Voyageur’s redwood shadow falls across the park that bears his name—its benches, tables, pond, path, grills, gazebo, green grass, and green leaves. 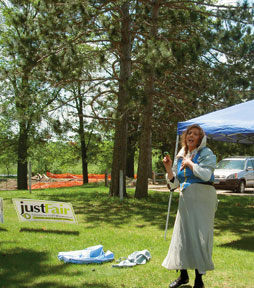 But on June 7, that shadow will touch men and women who honor the Voyageurs’s spirit in their own way. A local bevy will be observing Pride in the Park, a picnic whose purpose is appearance as much as it is amour-propre.

East Central Men’s Circle (ECMC) is an organization that in recent years has taken on the weighty task of building a GLBT-friendly atmosphere in rural Minnesota—specifically, the area ranging from Askov to Cambridge, and from Brainerd to Grantsburg, Wisconsin.

This year’s Pride in the Park is the fifth such event, one that has a duo of new supporters. Adding their planning chops to those of ECMC are Mora-East Central Minnesota PFLAG, as well as East Central Purple Circle, a newly formed women’s organization. All these groups are brimming with Pride…but it vibrates at a different frequency in the hinterlands.

ECMC President and Isanti-Cambridge resident Don Quaintance says, “The problem in a rural setting is distance. Instead of driving a few miles to any event if living in the city, we in the rural area may drive 50 to 50 miles.”

Like all the best gay things, the picnic has a theme: We Are Family.

The official press release states: “A family is not only one of inclusion, but of values of hard work, respect for others, love and commitment, along with a sense of belonging to the greater community of East Central Minnesota.” 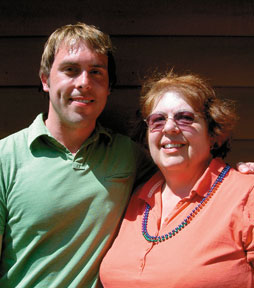 That “greater community” is key, according to ECMC member and Pine City planner Nathan Johnson.

In Johnson’s words, “What the Men’s Circle is doing, by cohosting this event, is demonstrating that we are here. Once people get to realize this, and they get to know the real us, we’ll hopefully begin to change hearts and minds about the issue [of GLBT Pride] for those that still struggle with it.”

That make-nice visibility is paying off, as Johnson shares: “I would suggest that most have the perception that it’s easier to live openly gay lives in bigger cities than in small towns. This may be true for some, but others—such as myself—are finding that generally, people are becoming more accepting of other people regardless of their orientation.”

That isn’t to say Johnson’s Voyageuristic visibility hasn’t come with a price.

Johnson remarks, “I’ve had a very positive experience at work and in the community, except for one of the local churches, where I was asked to renounce my membership. I have since found another church in Pine City where there are other gay and bisexual members, one that is accepting and open to taking a journey together in search of spiritual truths about the issues surrounding one’s sexuality.”
And that search’s reward is just as much part of the material world as it is the spiritual world.

As Johnson puts it, “We welcome everyone in Pine City.”