On April 4, PFund Foundation announced two “well-deserved” promotions, as the organization has been pursuing its goal to advance GLBT equality through fundraising and by providing resources for the GLBT community, Executive Director Susan Raffo said.

PFund promoted Ryan Kroening and Alfonso Wenker to Events and Outreach Coordinator and Director of Development and Communications, respectively. They will step into their new roles June 1. 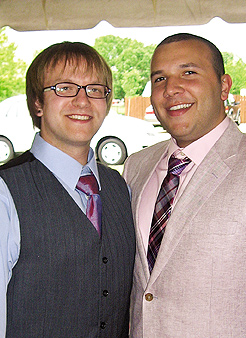 Raffo, who recently became Executive Director with Kate Eubank through a job-sharing structure, noted that the promotions could be called “catch-up,” because Kroening and Wenker have worked beyond expectations to achieve PFund’s goal of promoting GLBT equality.

In Raffo’s words, “In some ways, it feels like a catch-up, because really, this is what [Ryan]’s been doing. He ended up stepping in, and taking responsibilities outside of his job. This promotion is bringing his position to what he’s been doing all along.”

As Events and Outreach Coordinator, Kroening will facilitate outreach in the Midwest, and oversee all foundation events and day-to-day office activities, according to a press release.

In 2007, Kroening began as a volunteer with PFund, and became part of the staff in July 2010. He also worked with Project 515 and the Minnesota GLBTA Campus Alliance.

Kroening is a 2009 graduate of the University of Minnesota with a Bachelor of Individualized Studies in cultural anthropology, design, and family social science, with a minor in GLBT studies.

In a news release, Kroening stated, “I’m honored to be increasing my responsibilities with PFund, and look forward to engaging with our constituents across the region.”

Wenker remarked that he has “big shoes to fill.”

As Director of Development and Communications, Wenker, who has been with PFund for more than four years, will maintain relationships with donors, as well as strive to increase the organization’s visibility in the Midwest.

Referencing Wenker’s education as a graduate of the University of St. Thomas in public relations, Raffo observed, “This is what [Alfonso’s] training was for. He’s taking skills he already had to expand fundraising, and expand PFund’s reach across the region.”

Wenker served on the development staff of OutFront Minnesota, and was Cochair for the 2011 National Conference on LGBT Equality: Creating Change.

Since its inception in 1987, PFund has worked to advance social justice for GLBT communities in the Upper Midwest by directly assisting organizations, providing funding, encouraging philanthropy, and using media to promote GLBT issues.

Wenker enthused, “The most exciting part is that we get to work on a lot of different issues with different vantage points, from political advocacy to working to advance LGBT issues. I’m excited to continue to work for the LGBT community.”

With a new hire for Program Officer, too, Raffo pointed out that PFund’s staff and leadership represent many generations. The organization’s goal moving forward is to use that strength to listen to and gain wisdom from the many voices of the GLBT community, and to continue to provide the resources it needs.