Local author and teacher Ronald Perrier recently talked to Lavender about his latest book, a memoir, The Persistence of Vision: The Life Journey of a Gay Man 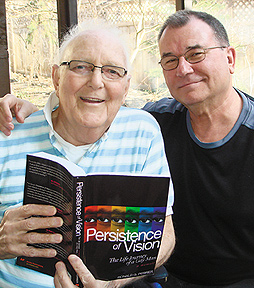 What was it like to grow up on a farm outside Stillwater in the early 1940s?
We were poor, but didn’t realize it, because we had enough to eat, and we had clothes, albeit hand-me-downs and patched. We would only see neighbor kids during the school year in the one-room country school we attended.

We got electricity and indoor plumbing when I was about 10 years old, in 1950. It was magical to us to simply snap a switch on the wall, and have lights come on in the ceiling. Also, to flush a toilet was in the realm of a dream—not real.

You first taught in 1962. As a gay man, were you able to detect gay students?
I was 22 years old when I got my first teaching job at a small town in Wisconsin. In 1962, a teacher could be fired if it was even suspected he/she was gay, so that all had to be a well-guarded secret.

There were some students who seemed to me to be gay, but it would have been totally irresponsible and unprofessional of me to have a discussion about the gay lifestyle with those students in that era.

As you neared retirement, did you find the times and attitudes changing toward GLBT students? Was it easier for them?
Young gay people today have role models to emulate, and thus, they don’t feel so much as outsiders. In that sense, it is considerably easier to come out today. Yet, we still hear horror stories of parents who disown their gay children, and evict them from the house.

I joined the faculty at St. Cloud State University [SCSU] in 1975, and even then, I was aware that gay faculty members had to be a bit careful—sort of like Don’t Ask, Don’t Tell in the military today. However, as the light of truth became brighter, and the phobia of gay people changed to more and more enlightenment and understanding, I felt very comfortable offering a course at SCSU, “The Gay & Lesbian in Film & TV.” I was surprised to find that about 75 students enrolled in this elective course—straights, gays, transgender, old, young.

A number of students who did not have the courage to talk with friends and family would often come to my office to chat about their being gay. I felt comfortable with that, and I felt honored that they trusted me.

One of your mentors at the University of Minnesota was Dr. Charles Nolte, and one of your great idols—and thesis topic—was playwright Tennessee Williams. How did you all get together?
When I decided the topic of research for my PhD would be the recent plays of Tennessee Williams, I wrote to him in Key West, and asked if he could provide me with some background material. I certainly did not expect to get a response from Mr. Williams, but he did write back, and invited me to visit him in New Orleans—which I did.

At one point, I asked him if he remembered Charles Nolte, a prominent Broadway star in early 1950s, and Williams said he remembered seeing Nolte onstage in Billy Budd. I told Williams that Nolte was now teaching at the University of Minnesota, was a good friend of mine, and was directing a production of A Streetcar Named Desire the following spring. I asked if he would like to come and see Nolte’s production, and spend a weekend in Minneapolis. He agreed. He saw Nolte’s production, and loved it, particularly Debra Mooney, who played Blanche.

What has been the greatest pleasure in teaching?
My career spanned 40 years, and there was rarely a day in all that time when I did not look forward to teaching. My joy in teaching was in getting to know and respect so many wonderful young men and women. Many of them have remained friends.

Ask any good teacher why they keep teaching, and they will say satisfaction, the joy of seeing students learn—never the salary. They do their jobs out of service and love, and money can never buy that kind of job satisfaction.

You talk candidly about a breakdown, and undergoing a barbaric regimen of electroshock therapy in 1961. Two things stood out: your unwavering determination to pursue your studies to become a teacher; and that in an accepting society, there might have been no breakdown.
In the chapter “Collision,” I describe how the forces of religion [Perrier was raised Catholic], the paranoia of the post-World War II era in America, and my being a gay young man all crashed together. This depression caused me to be hospitalized, and to undergo electroshock treatments, intensive therapy, and insulin shock therapy. I was hospitalized for six or seven weeks in Wisconsin. My biggest fear was losing my memory. I was a junior in college, desperately wanted to be a teacher, and feared that my brain would have lost its ability to think or remember.

Even the doctors who administered the electroshock were not sure why it worked on some patients, and I worried it would not work on me. In the history of psychiatry, these highly trained doctors were gambling with techniques they did not understand. I was lucky. While the entire experience was horrific and frightening beyond belief, it worked for me.

One can only surmise that my coming out as a gay man would have been so much easier had it happened today, where awareness—if not full acceptance—of GLBT matters was in the air. As any reader can imagine, that chapter, “Collision,” was the most difficult one for me to write.

Can you talk a bit about what “Minneapolis” or “Twin Cities” meant to a gay youngster out on a farm?
[The city] was at once frightening and large, and filled with lights and sounds, but it was also something I desperately wanted to be a part of. It was a kind of approach/avoidance feeling—I wanted to go there, but I was afraid of going. When I retired from teaching in 2002 from St. Cloud State, I immediately bought a condo right in Downtown Minneapolis!

Lavender reviewed your Growing Up Male in America (2002) and A Sense of Honor: Remembrances of WWII Veterans (2005). In the light of your memoirs, it’s obvious that Story is important to you. Can you speak to that?
Interesting question! Growing Up Male and the WWII books are oral histories. It’s their words edited down by me to make sense to the reader. In Persistence of Vision, I took the courage to tell my own story. As I say in the Foreword, it’s like ripping off one’s skin, and allowing the nerve endings to be bared. Public nudity! There are parts of my life which even many of my friends will be surprised to read about in this book, but a true memoir has to let it all out, and this is what I did, or tried to do, in this book.

To find out more about The Persistence of Vision or Perrier’s other books, visit www.archiepub.com. Perrier will be signing copies of his book at Wilde Roast Café, 518 East Hennepin Avenue, Minneapolis, on June 23, 7 PM.