Paula Poundstone Heads to the Guthrie

Halley’s Comet of Comedy Blazing Through

Like Halley’s Comet, she doesn’t pass through very often, but when she does, she’s spectacular.

Paula Poundstone is appearing at the Guthrie on February 28 with just her trademark stool, mike, and can of Diet Pepsi to astound and delight by her off-the-cuff, straight-from-the-cerebrum running commentary. With only those props, she commands rapt attention through her razor-sharp wit and spontaneity. She interacts spontaneously with real live members of her audience. 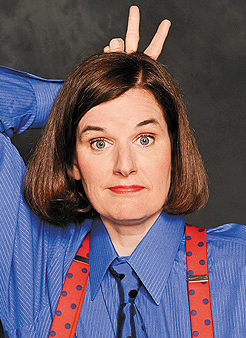 But Poundstone is not confined to the stage. Her commentaries pour into your ears from National Public Radio’s Morning Edition. She remains one of the most popular panelists on Wait Wait…Don’t Tell Me!, NPR’s weekly news quiz show podcast.

Poundstone’s writing credits include such magazines as Entertainment Weekly, Glamour, and Mother Jones, as well as The Los Angeles Times. Her first book, There’s Nothing in this Book I Meant to Say, was published in 2006.

Recognized as one of Comedy Central’s 100 greatest stand-ups of all time in 2004, Poundstone was the first woman to perform at a White House Correspondents Dinner.

This oft-quoted comment is absolutely true: “It’s impossible to attend a Paula Poundstone performance without marveling at her ability to interact spontaneously with audience members, who leave her live shows often complaining that their cheeks hurt from laughter.”

Lavender was able to catch up with Poundstone for a fleeting moment to ask how she comes up with her comedy routines, and she replied, “I don’t know that I’ll be of much help here, but I’ll give it a try. I don’t exactly know how material comes to me. Sometimes, I carry around a notebook, because I think of so much stuff, I can’t keep track of it, and other times, I just don’t have a thought in my head. Sometimes, I don’t so much write as I do take notes. For the last couple of years, I’ve been an avid tweeter. I have some online news sites that I check a few times a day, and I listen to public radio whenever I can.”

Like her audience, Poundstone is subject to quotidian constraints, as she shared, “I have three kids, sixteen cats, a German Shepherd-mix dog, a bearded dragon lizard, a lop-eared bunny. The truth is, though, my ability to keep up on what’s going on in the world is directly, and oppositely, proportional to how challenging my family life is on any given day. For example, my son has been out of school for weeks, so it’s only through much extra effort that I’ve been able to glean that Obama is President, and Egypt is not currently a great vacation destination.”

It doesn’t happen often, so catch the Halley’s Comet of Comedy on a stage near you.