One of the joys of college sports is feeling part of a team. Sharing practice sessions, meals, and road trips draws athletes from different backgrounds together. The locker room becomes a home away from home. For males, it’s a place where daily banter about teammates’ races, ethnicities, physical features, and girlfriends is a welcome diversion from the political correctness that rules the rest of society. 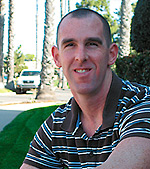 Unless you’re gay and closeted.

Those athletes never really feel a part of their team. Even in the locker room, college athletes are isolated. The incessant topic of conversation—“banging” girls—bears no relevance to reality.

That scenario is as true in 2008 as it ever was. While the rest of America changes, much of college sports remains locked in mid-20th-Century mode.

That’s not just conjecture. It’s what former college athlete Paul Tontz has discovered, as he struggles to complete his PhD project at the University of Denver. The topic is factors that contribute to invisibility or visibility for Division I gay male athletes.

Yet, finding appropriate subjects has been nearly impossible. They do exist. However, at the elite collegiate level, they’re about as hard to find as same-sex married couples in the Bush White House.

Tontz, 31, understands. Growing up in San Diego as the third of nine siblings in a tight-knit, staunchly Catholic family, he was so sheltered, he “didn’t realize what gay was” until after high school.

Sports provided one way to feel “normal.” Tontz played tennis and volleyball, ran cross-country and track, and swam. At the University of San Diego, he rowed.

“Sports saved me,” Tontz says. “It gave me confidence, and a place to feel at home.”

In 2000, Tontz moved to Tampa, earned a master’s degree in education, and was an athletic advisor and academic coach. Returning to San Diego, he worked with college athletes at two universities.

Looking back, Tontz muses, “I could have supported the athletes who had sexual-identity issues much better. But I was still pretty closeted. I really regret that.”

In 2004, Tontz entered the University of Denver’s doctoral program in higher education administration. Inspired by the work of Pat Griffin and Eric Anderson—noted researchers specializing in gay sports—he began studying why Division I male athletes choose to conceal or reveal their sexual orientation to teammates and coaches. That choice affects the rest of each gay athlete’s college sports experience, according to Tontz.

“Before I started, I didn’t realize how difficult it would be to find them,” Tontz admits. “I thought I’d move to LA, and start interviewing. But I couldn’t find any out athletes at UCLA or USC. I’m not sure why—maybe because they’re such high-profile schools.”

The search was equally difficult in the rest of the country.

His several face-to-face interviews with out athletes replicate Anderson’s findings: “Those who are openly gay have high levels of self-confidence and ability. Gay athletes with strong performance levels have plenty of social capital. If you’re an excellent swimmer who happens to be gay, your teammates and coaches look the other way.”

Out athletes are happy, Tontz reports, because they don’t lead dual lives. Freed from worrying about being found out, they function well athletically.

Tontz is frustrated at his inability to find gay D-I football, basketball, and baseball players. He has heard from bisexuals in those sports, but his study is limited to gay men.

What Tontz has found so far, in his words, “reinforces the stereotypical look of gay sports—that it’s all swimmers, divers, and runners. I think because there is already gay visibility in those sports, it’s easier for those athletes to come out.”

Tontz has found that sports like swimming, which attracts both male and female athletes, help facilitate the coming-out process. The close interaction between genders creates a feeling of comfort. One male swimmer said he talked about “guy issues” with a female coach—something that could not happen in, say, football.

Though the NCAA has supported Tontz with a travel grant, he finds little understanding of gay issues at individual colleges. As Tontz relates, “Most gay athletes say not enough is being done at their schools, and what goes on is reactive rather than proactive. There’s still the mentality that ‘we don’t have gay athletes here besides our one swimmer, so why spend money on education?’”

“The athletes I’ve talked to have been amazing,” Tontz shares. “I’m a completely difference person now—socially, emotionally, and professionally.”

Meeting gay athletes inspired Tontz to return to competition. He is training for triathlons, using a subtle yet clever motto: “Out to Tri.”

And Tontz will keep trying, too, to find out gay college athletes to interview.