Patty Keegan grew up in a family business that was GLBT-friendly. In 1975, her father, Jack Keegan, opened Jakeeno’s, an Italian restaurant, at 3555 Chicago Avenue South, Minneapolis. In the 1980s, he operated a branch at West 15th Street and LaSalle Avenue, Minneapolis, which closed after a few years. As well, Jakeeno’s Trattoria is now up the street from the original in the Midtown Global Market at 920 East Lake Street, Minneapolis. 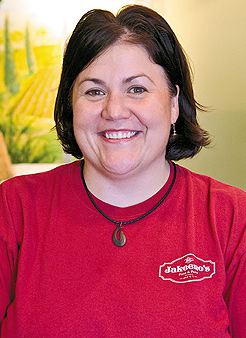 As Patty Keegan says, “His support of the GLBT community started decades ago when we had a second location near Loring Park.”

A quarter-century ago, under Jack Keegan’s aegis, Jakeeno’s was one of the first local food establishments to advertise in the fledgling gay press—such as Tim Campbell’s GLC Voice Newspaper.

Patty Keegan recalls, “It was great growing up in the pizza business. Both of my sisters and I worked for our Dad at some point from junior high on. It gave us exposure to many different kinds of people, and taught us respect and tolerance.”

Even as her father was marketing Jakeeno’s to the GLBT community, Keegan began to sense that her sexual orientation was unlike that of her peers.

In Keegan’s words, “I had always known I was different from my friends, but wasn’t ready to accept and live it until about four years ago.”

After a number of years of keeping her secret, Keegan finally came out in a unique way while on vacation thanks to a Jakeeno’s patron.

Keegan relates, “I had rented a condo in Mexico from a customer, and went by myself for a week. I was reading a ‘dirty’ book on the beach, when a woman I had become acquainted with asked what it was. I told her it was naughty, and she hounded me until I showed it to her…to which she exclaimed, ‘I knew it!’

“Turned out she and her partner had also rented a condo from my customer, and lived only a few blocks from my house in Minneapolis. We began a friendship that continued after we got home. They shared their stories, and encouraged me to fully accept who I was, and to want to live my life that way.

“I will always be grateful for their coming into my life when they did. They were my ‘sign’ I was looking for. After that, I joined a dating service, and began my search to find someone to share my life with.”

Keegan’s family has been accepting of her coming out.

As Keegan explains, “My family has been supportive. I think Dad accepted it much easier than Mom, just because he has been exposed to gay people much more than she has.

“Everyone was surprised, which at times cracks me up, because as I look back, there were so many obvious signs that even I say, ‘Wow, I can’t believe I didn’t see myself as gay!’

“They do worry—they don’t want things to be hard for me. But they’ve accepted and included my girlfriend in our lives. They have all said that they just want me to be happy. That is the most important thing!”

Today, Jack Keegan is retired from Jakeeno’s, although he helps out frequently, especially at the lunch rush, and his daughter notes, “I am now co-owner and sole operator, as my sister, Amy, has left the daily operations.”

Regarding her being open about her sexual orientation, Patty Keegan observes, “I don’t know how much my being gay has affected our business either positively or negatively. I’m sure there are people on both sides that will either support us more because I am, or reject us now that they know.”

What else would Keegan tell Lavender readers, particularly those who have not decided to live openly yet?

As Keegan remarks, “Contrary to what some of my employees might say, I am not one to give advice. But each person will know when it is their time to live an openly gay life. You have to be comfortable with who you are, and not be worried about what everyone else might think. I do wish I had figured things out earlier in life. I wasted a lot of time not being ready, but in the end, the life I’m living and the woman in it were worth the wait.”