Scott R. Kyle, 48, passed away unexpectedly on July 27 at his apartment in Minneapolis. He was born June 25, 1961, in New Richmond, Wisconsin. 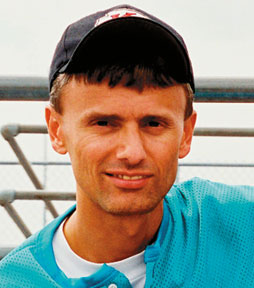 Kyle was well-known for his athletic achievement. He spent the past 25 years playing competitive softball in the Twin Cities Goodtime Softball League (TCGSL), as well as in leagues and national tournaments sanctioned by the North American Gay Amateur Athletic Alliance (NAGAAA). Among his greatest softball accomplishments, he was a key player on the A-level team that represented the Twin Cities and took first place at the 1987 and 1988 NAGAAA World Series. He was a member of the same team that also took second place at the 1992 World Series, and third place three other years.

At the 2009 World Series, which takes place August 31-September 5 in Milwaukee, Wisconsin, Kyle’s stellar softball career will be honored when he will be inducted posthumously into the NAGAA Hall of Fame.

A local memorial service for Kyle is being planned for early October.