After moving to the Twin Cities in the mid-1990s, Lippa was a popular female impersonator as Shady Sadie and then Sadie Seville at the Brass Rail, Trikkx, and the Venetian Inn. He was active in the Imperial Court of Minnesota (ICOM), serving as Empress VIII, Princess Royale VI, and President of the Board of Directors. 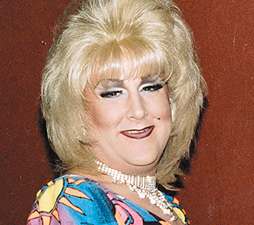 Philip A. Berglin-Rhodes (aka Heather Haldane), ICOM Emperor X and Empress XIV, said in a statement, “Sadie was a great friend and leader in the Twin Cities community. She had friends around the country. She led our most successful ICOM reign. She became a close friend to courts in Winnipeg, Iowa, Nebraska, Denver, and Colorado Springs, and was Half Empress in Regina. She was always there for the ‘Seville Family,’ and those of us who were close will always remember Gene as ‘Mom.’”

Post condolences and messages on the Sadie Seville MySpace page. And watch for an upcoming show in memory of Seville hosted by The Rochester Girls.