Whether you are notorious for your sweet tooth; have a slight love affair with wine; or even better yet, have both—if you haven’t visited Wilde Roast Café lately, it’s about time.

While it offers a variety of satisfying lunch and drink options, the establishment also plates up several delectable desserts, from carrot cake to chocolate cake to everything in between. If you are one of the aforementioned people, then you already know that nothing goes better with a slice of heaven on a plate than a tongue-tingling glass of wine. 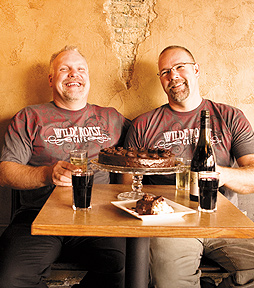 For those who aren’t one of those folks, Dean Schlaak—co-owner of Wilde Roast along with life and business partner Tom DeGree—offers his thoughts on desserts and various wine selections that could make potentially perfect pairings.

Perhaps Wilde Roast’s most famous dessert, the flourless chocolate cake known as La Bette Noir, could be paired with a glass of Liberty School Cabernet Sauvignon, Schlaak suggests. The wine mixes the dark fruit flavors of blackberry and dark cherry that he says would go well not only with the La Bette Noir, but also molten Lava Cake. Chocolate and red wine, anyone?

Next on the list, Schlaak provides a playing partner for Wilde Roast’s well-known carrot cake, a local favorite of several food writers. He notes that it would blend well with Mountain View Chardonnay, because of its oak-like flavors and hints of spice thrown in. As saying goes, this one’s definitely spice and everything nice.

Looking for another spiced-up combination? Well, look no further than Wilde Roast’s Granny Smith Apple Crisp paired with a glass of Two Brothers Riesling straight out of Germany. A sip of the wine will leave consumers with a hint of citrus and apple on their tongue. When mixed with a bite of apple crisp, with its blend of cinnamon and allspice, this combo will have you begging for more of both.

Additionally, while it’s a relatively new dessert gracing the case at Wilde Roast, Schlaak relates that the supernutty Caramel Nut Tart would mix well with a glass of Permutations Pinot Noir, with its flavor pops of raspberry and oak. The wine, known for being smooth and silky, with a hint of dryness, would make a terrific tango with the new kid on the block.

On the lighter side of things, Schlaak says Wilde Roast’s Vanilla Crème Brûlée and Cannela Bellini pair quite uniquely with the pure peach and sparkling wine.

Not to leave out nonalcohol consumers, Wilde Roast continues to offer a host of liquid luxuries, from smoothies to juices to its signature blend coffee, available in both regular and decaf.

With the days getting colder, and the nights getting darker, the warmth provided by an indoor fireplace and the conversation opportunities to be had among friends make now the perfect time to head to Wilde Roast Café, and trying a pairing for yourself.

Who knows? Maybe you even will find your own personal pairing to fall in love with.