Out of the Pocket, and into Today

Bill Konigsberg’s high school years were confusing. He loved baseball, but was attracted to guys. He’d never heard of gay athletes; he thought he was the only one on the planet. Years later, the world seemed a different place. Gay sports boomed; there were openly gay athletes everywhere, particularly at the college and high school levels. When Konigsberg began researching his first novel, ¬Out of the Pocket—about a gay high school quarterback—he talked with football players at an elite private high school in New York. 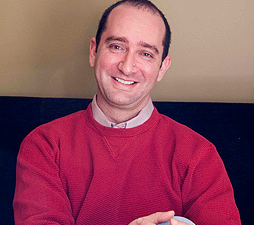 All were very thoughtful, Konigsberg says; all seemed to be straight. The conversation moved along well—until the author asked what would happen if a best friend came out. One player replied instantly: “I’d kill him.”

“He knew I was gay,” Konigsberg recalls. “That shocked me.”

Pressing for a reason, Konigsberg discovered the player would feel “betrayed.” Konigsberg notes, “I really had to think about that. On face value, it was frightening. But I think he was trying, inarticulately, to say something about friendship, sports, secrets, and masculinity. He was not hateful. He was thoughtful the rest of the time. So I took what he said, and tried to write a book without villains.”

High school sports—and growing up gay—was familiar territory for the New York native. He played baseball only because he was too skinny for his favorite sport, football. But without gay athletes as role models, he floundered. “I didn’t know how to be who I was,” he says today.

At Columbia University, he covered sports for the ¬Spectator. In 1994, shortly after graduation, Major League Baseball players went on strike. With sports pages starving for news, Konigsberg began simulating the rest of the season. Newspapers like the ¬New York Daily News, San Francisco Chronicle¬, and Miami Herald bought his intriguing stories.

Dateline NBC came to Konigsberg’s small Chelsea apartment for an interview. Meeting Konigsberg’s male “roommate,” and seeing just one bed, a producer asked where Konigsberg slept. “I panicked,” he says. “But that incident played a huge role in my coming out in sports.”

Yet in early 2001, when he worked at ESPN.com as an assistant editor feeding baseball news to online fanatics, he was out to only five colleagues. That May the editor-in-chief of ¬Out magazine ignited a sports firestorm by revealing his affair with an unnamed major league baseball player. Konigsberg banged out a story for ESPN.com’s front page. In it, he outed himself to all his co-workers—and millions of sports fans around the world.
“That changed my life,” Konigsberg says simply. “There were no repercussions whatsoever. Since then, I’ve been exactly who I am.”

He left ESPN.com the next year, and entered Arizona State University’s graduate creative writing program. While there he wrote the first draft of Out of the Pocket, and two other books.

Out of the Pocket began as a short story called “Audibles.” It was an updated version of the life of Ed Gallagher, a friend of Konigsberg’s who tried to commit suicide after a tormented career as a college football player. Jumping from a dam, Gallagher became a quadriplegic.

“I tried to imagine being a gay quarterback, what it would feel like,” Konigsberg says. “Ed’s story was terrible, but things had changed since the 1980s. Then I went back to the short story, and took it from there.”

Konigsberg’s research encompassed more than speaking with straight high school football players. His nephew—a high school student himself—is gay. “I watched his coming-out process while editing the book,” Konigsberg says. “He lives in a very conservative area, but things went well. That changed the book a lot. The first draft was very tragic. I found out there are a lot of other possibilities besides suicide.”

Would Konigsberg have written a different book if he focused on another sport? “Sure,” he says. “But I’m not sure how. The team dynamic in football works against coming out. But for reasons I don’t understand, football may also be better for being gay. I’ve heard worse stories in baseball, and basketball is pretty bad, too.”

What makes high school football tough, Konigsberg says, is “the intensity of the team experience. There’s a much stronger level of bonding than in baseball or basketball.” That bonding, he says, led the player he interviewed to say he would “kill” a friend who came out.

But, Konigsberg makes clear, that was an isolated outburst. At the end of the meeting, he says, “I felt confident that kids today—including athletes—are better prepared for dealing with gay people in sports than my generation was. Despite that one comment, I’m filled with optimism.”

He’s not the only one. A few days earlier, Konigsberg heard from a gay college athlete who came out to his captains. “He said reading my book made him very hopeful,” Konigsberg notes with pride.