Listen up, Katy Perry (and, to be honest, plenty of others): This is how you make driving dance music. On the second (of three) albums Robyn plans to release in 2010, the Swedish singer continues the satisfying merging of hot funk and cold electronic that has marked her previous work. With seven new cuts and a strings-only version of “Indestructible,” she hits the dance floor hard and quick before heading out after about half an hour. Along the way, she lays waste to dance floors; lovers; and, well, lovers on the dance floor (the driving dirt of “Criminal Intent”). Snoop Dogg, fresh from his Katy Perry crossover, provides a so-so rap on the otherwise strong “U Should Know Better.” Robyn channels Kraftwerk on “We Dance to the Beat,” but still manages to make it sound hot. The finale could have been another tossed-off “I’m so strong” ballad, but Robyn plus the strings make it work. 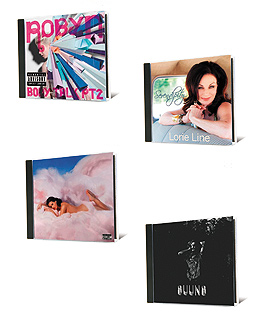 The popular pianist comes out of the studio with her first all-original collection of songs in a decade. Written over a two-week span earlier this summer (with Lorie Line setting out each day to write a new tune), the collection has a free, almost effortless vibe to it—always difficult to pull off, but oh so rewarding for the listener. The titles—including “My Muddy Man” (about her husband, Jim); “Casa Blanca Me Encanta,” an ode to their home; and “Mother Earth,” easy to fathom—stick close to ideas of a well-lived life. Serendipity has plenty of signs that it was an album made in Minnesota, from a gentle composition titled “The Cows” to the easy-to-understand “Lake Minnetonka.” The playing is as sharp as you would expect from a seasoned pro, all the while aided and augmented by a fleet of backing musicians who work to bring out the full power of Line’s inspired songs.

She wants to be the queen of the pop songster ball, but artists more popular (Lady Gaga) and talented (Robyn plus many others) outstrip Katy Perry in nearly every way. It didn’t help that this album was fueled by the big hit of the early summer, “California Gurls,” which passed its stay-fresh date by the time the album dropped. At album length, Perry’s shortcomings come to the fore. Her singing is fairly pedestrian. Once you get deeper than the peppy, poppy singles, a lot of musical sludge must be listened through, even on a relatively short collection. It reaches its nadir, fittingly enough, at the end (apart from some useless remixes) with “Pearl,” which features this puzzling, Alanis Morrissette-level couplet: “She could be the Statue of Liberty/She could be Joan d’Arc.” Not sure what a giant statue or a Middle-Ages religious leader have to do with a lame pop ballad. Stick to the singles here.

Over time, the lines that defined different pieces of the music pie have blurred to the point of being nonexistent. Bands now freely pick and choose their own little subcategories. Suuns fall roughly into a parcel of acts merging moody electronics, some danceable beats, and jangling to harsh guitars into a sound that works more often than it does not. On Zeroes QC, the band goes from spare electronics that wouldn’t sound out of place on an XX or Phantogram record to enough guitar racket to bring to mind classic-era Jesus and Mary Chain. In the end, the artist who seems to be closest to the surface is Beck—Zeroes QC has the same sense of anything can happen. The album does lack cohesion, plus the blur of ideas and sounds can wear the listener down. But plenty of good spread throughout the record is enough to make you come back for more.