If you are going to start your album with a faux overture, you had better bring the goods. Thankfully, indie-spirited R&B artist Monea does just that on this epic-in-a-good-way release that is one of the true highlights of the summer. Slipping with ease and evident glee among genres—hip-hop, traditional soul, modern R&B, rocking dance music—Monea isn’t one to be confined by expectations. After all, infectious opening single “Tightrope” moves from modern dance groove complete with a rap by Outkast’s Big Boi to a funky soul provided by a real live horn section. Compare this to the acid-drenched heaviness of “Mushroom & Roses” that brings to mind P-Funk doing a Led Zeppelin cover. Speaking of P-Funk, a distinct Clintonesque tone is evident, as the album is Parts 2 and 3 of a suite inspired by Metropolis. Then again, while science fiction trappings galore are here, it all comes down to the brilliant performing, singing, and songs. Monea will be at First Avenue on September 23. 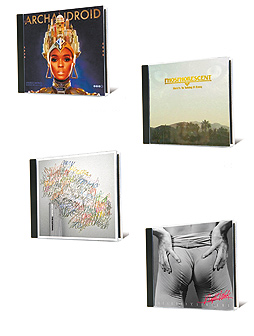 Here’s to Taking It Easy
Phosphorescent

After recording a collection of Willie Nelson covers, Matthew Houck returns to his own muse on Phosphorescent’s sixth album. The collection of country/folk hits the summer sweet spot—this is music for the back porch, old dog optional. Unlike the group’s breakout, 2007’s Pride, Houck is joined by the full band here. What may be lost in intimacy is made up by stellar playing, and that unique vibe only a live band can provide. At times, the album sounds like a lost relic from the middle 1970s, when rockers like Neil Young moved freely from genre to genre, molding a new sound that was much more than just “country rock.” Not to push the Young thing too far, but “Los Angeles” is an out-of-control guitar solo away from being a Crazy Horse outtake. Then again, Phosphorescent is still their own band, using the musical tools provided by others to craft something unique and absolutely engaging. Phosphorescent will be at the Cedar Cultural Center on August 3.

Albums can make an immediate impact, or sometimes, they creep up on you. I knew I liked what I heard from High Violet, but it wasn’t until I spent a couple of hours in my garden listening to the album on repeat while weeding that I realized just how great this collection by the National is. Loaded with dark imagery and heavy emotions, High Violet is the kind of collection that gives indie rock a good name. Led by Matt Berninger’s deep baritone, and a musical style focused mainly on songwriting rather than gimmicks, the album takes us into a moody world where the displaced (the band moved to New York from Cincinnati) try to find their grounding amid layers of confusion. That comes out on songs like “Little Faith” and “Bloodbuzz Ohio.” While the latter has become familiar by constant play, it hasn’t lost any of its impact—and that goes for the rest of the album. The National will be at First Avenue on August 5-6

The Scissor Sisters push their inner Pet Shop Boys much more to the fore on album number three, producing a largely electronic album packed with danceable beats and outsized passion. It probably is experienced best on a sweaty dance floor than in the comfort of your living room, but still has its pop moments—from the pulsing opening of the title track to the Kraftwerk-like electronics of “Skin this Cat.” Throughout, frontman Jake Shears doesn’t just bring sexual heat, but continues with the band’s sly sense of humor. What’s missing is the sense of adventure that powered some of the band’s earlier tracks—a cover of Pink Floyd, or the folk influence on “I Can’t Decide.” Oh, sure, you have Ian McKellen giving an overheated monologue at the end of “Invisible Light,” but those moments are too few and far between. The band reportedly scrapped the original recordings for the album—one wonders what they may have had. The Scissor Sisters will be at Epic on September 4.