Sometimes, it doesn’t take a whole roomful of musicians to make beguiling music. Local two-piece Peter Wolf Crier creates engaging music throughout Inter-Be, which recently was rereleased by indie stalwarts Jagjaguwar (also the home of Gayngs). Band members Brian Moen and Peter Pisano create layered musical tapestries, though usually starting with a low-key folk-rock vibe. They add all sorts of touches, from classic pop vocals to organ lines that play off the main melody without directly connecting to it. When all the elements come into complete focus, Peter Wolf Crier is an incredible listen, such as tracks like “You’re So High” and album closer “In Response.” The finale builds slowly—all centered on a simple guitar riff—into something grand and beautiful. The weak-sounding indie-rock vocals do get a bit wearing over the length of an album, but the tunes, the playing, and the arrangements make up for any weakness in that department. 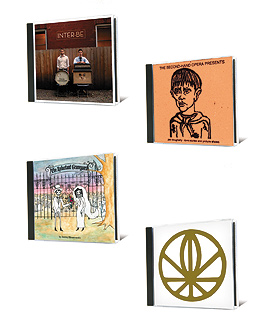 Dougherty’s MySpace page proudly declares the act is the “loudest folk band in America.” You could argue the point, but the group does bring the noise on this collection, either as an accent or a way to build the musical intensity. Employing a gentle voice that easily grows with the music, Dougherty takes us through lost loves, heartbreaks, and lessons learned. The songs are bracing in their honesty, such as “Loose Leaf Love Letter,” where someone tries a fresh start by breaking away from the mementos of past love, or “My Father’s Lullaby,” where the narrator searches for the difficult but joyful truths in his father’s life. Working with a talented band, Dougherty crafts a set of music that—unlike plenty of modern folk rock—sticks in the head. They even include a blank disc with instructions to “burn this for a friend.” The band plays the first Wednesday of the month at Acadia Café, Minneapolis.

The last thing you’d expect from titles like “Lazy Bones,” “Organ Donor,” and “A Girl, a Boy and a Graveyard” is a collection of jaunty pop tunes, but Jeremy Messersmith pulls it off with aplomb. The winning tunes are only part of it, though reminding the listener of the Kinks in the album’s first few seconds is a wonderful start. The vocals also contribute, often soaring over the melodies, drawing one into the songs, as well as—on a tune like standout “Violet”—forcing him or her to stop whatever he or she is doing, and listen to the gorgeous harmonies. That brings us to the lyrics of the songs themselves, which—as indicated by the titles—do land on the darker side. It’s not a heavy-handed Goth darkness, though, but more the wry, knowing lyrical downer you might hear on a Magnetic Fields album. Even when the music gets a bid maudlin, these elements still make it pure joy.

Supergroups come and go as quickly as moths to a flame. The key is to catch them while they’re hot. Heavily hyped Gayngs—masterminded by producer Ryan Olson, and featuring artists as diverse as Solid Gold, Dessa, and members of Bon Iver—blazes on Reylated. The set sounds like 10cc’s strung-out brother made it after a weekend bender. It would be a misnomer to call the spare, moody sonic landscapes “mellow”—even the lyricless “The Beatdown” carries plenty of menace and paranoia, while lead-off track “The Gaudy Side of Town” uses all its seven-minute running time to build a distinct atmosphere. Give plenty of credit for that to Solid Gold’s Zach Coulter, whose voice helps to give the album a distinct sound and vibe. In the end, more than two-dozen contributors are here, but no one is showing off—all the pieces are for the moody and murky (in a good way) whole.