DJ Danger Mouse isn’t one to rest on his laurels, or to avoid new challenges. He had hits with Gnarls Barkley; stretched hip-hop with MF Doom; and even brought Jay-Z and the Beatles together (albeit unofficially). Now, he has turned to James Mercer, of folksy indie rockers the Shins, for Broken Bells, an intriguing if somewhat incomplete collection of tunes. While the two artists come from different worlds, they have a kindred sense of exploration, and you can find it in the best of the 10 tracks on this self-titled debut. Danger Mouse’s musical backdrop is a bit gentler than usual, which you can hear on the album’s opener, “The High Road,” as a stuttering electronic groove gives way to a much gentler funk beat. The song is catchy as hell, right down to a group chorus. Elsewhere, it sounds like the duo more is going through the motions. Honestly, maybe a couple of singles would have been a better route. 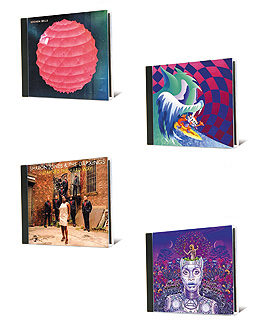 Lots of rock and pop bands dread their second albums. After all, artists have had their whole lives to compile the first, while the second usually has to come together in a year or less. So, first off, yes, MGMT avoids the sophomore slump. They do it, like plenty of artists in the past, by going off in a different direction. The dirty electronics of debut Ocacular Spectacular have given way to a sound that features, at turns, spare electronics, psychedelic pop, and straight-out pop craft. At times, the music threatens to careen completely off course, such as the final 30 seconds of “Flash Delirium,” or the riffs of the 12-minute “Siberian Breaks.” Yet, even that gets tempered with the oddball charm of “Brian Eno,” where the band lets us know who was their favorite member of Roxy Music. Lots of great artists have made careers out of barely controlled musical madness, and another entry is always welcome.

I Learned the Hard Way
Sharon Jones and the Dap-Kings

Soul isn’t dead—especially when the likes of Jones and the ace players from the Dap-Kings still are in the game. Like a lost treasure from the early 1970s, I Learned the Hard Way brings the driving, funky goods, from Jones’s worn-with-age voice to the epic sounds providing the album’s backbone. No instant stardom in Jones’s life, just years of working at Riker’s Island and as an armored car driver, while she sang her songs. She’s just like her characters—a bit battered by life, but ready to take on all comers. That strength comes through on each of the tracks here, from the ’60s vibe of the title track to the straight R&B of “Window Dressing.” Through it all, the Dap-Kings build on the classic efforts of the combos that laid down the back beat at Motown, Stax, or any number of others. It sounds old-fashioned, but plenty of life is left in those sounds, as proven here.

Badu goes from strength to strength on this follow-up to her terrific Part One (Fourth World War), issued in 2008. A modern sheen may be over the songs, but this is as much classic soul as Sharon Jones’s more traditional sound. While the video for “Window Seat” has garnered the most attention (stripping nude at the site where President John Kennedy was shot will do that), it’s the music here that will endure. Working with a bevy of producers, Badu focuses on the organics, dealing with analog instruments (no digital strings here) to craft a string of beguiling, moody, and sometimes brilliant pieces. It’s not an album of obvious hits—even leadoff single “Window Seat” plays pretty close to the vest, while the closer runs more than 10 minutes—but it is one that seeps into the mind and heart as it runs, and makes you want to listen to it all over again once it is done.