So, what can be expected from the first solo album by the Sigur Ros frontman? The Icelandic combo has made a career out of lengthy atmospheric pieces held together by the sprawling, otherworldly vocals of Jónsi—often sung in a language all his own. Instead of going bigger on Go, he cuts to the chase. Here, we have a collection of nine pop songs that embrace the whimsical side of his musical nature. It’s aided by the shorter pieces—a lot of the best Sigur Ros tunes clock in around 10 minutes—which don’t confine Jónsi as much as compress the ideas. That makes the music somewhat more accessible (e.g., opener “Go Do”), though a piece like the circular “Tornado” probably isn’t going to end up on a pop station anytime soon. No matter the stylistic changes, the ear keeps coming back to the singer’s soaring falsetto vocals, which cut through the musical backdrops like something from a world far away. 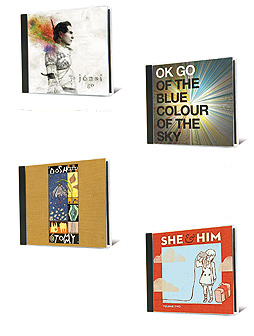 Of the Blue Colour of the Sky
OK Go

To open album number three, OK Go get all sleazy on “WTF”—well, not quite like early Prince/Rick James, but more like Beck circa Midnite Vultures. You know, guys who really aren’t all that sleazy, but kind of like pretending hanging out in tight leather pants in a city’s red light district is how they like to spend their evenings. The band quickly goes back into poppier territory, but the spirit of moving beyond comfort zones remains throughout the collection. You’ll find expansive pop songs—tracks that seemingly break down long before the end, prior to regaining their composure—and others made up of more mood than melody. It all probably ties together somehow (the title alludes to a 19th-Century book), but really, when I’m listening to an act like OK Go, it’s just about the tunes. While sometimes getting buried beneath all the other stuff, they ring out enough to make the album a pleasure ride.

Dosh’s latest album may have arrived at the beginning of spring, but it really is meant for late nights, gloomy mornings, and stormy days. The local electronic wizard, whose collaborators have included Andrew Bird and Bonnie “Prince” Billie, gives us a set of atmospheric, almost entirely instrumental, music that often evokes the quietest moments of life in a busy city. Named for Tom Cesario, a longtime friend who died two years ago, Tommy evokes the melancholy of loss without wallowing in it. Pieces like “Country Road X” and the closer, “Gare de Lyon,” are dense creations that still allow the listener in from the first go-around, but open up with greater depth each time through. Bird also makes a pair of appearances here. On “Number 41,” a dense opening eventually gives way to a short, spare vocal. “Nevermet” plays as a more traditional, albeit sad, pop song. It’s a fine album from beginning to end.

Volume Two
She & Him

A collaboration between actor/singer Zooey Deschanel and neofolk superstar M. Ward, She & Him brings plenty of simple charms. Volume Two is an unassuming collection of songs, featuring plenty of country-tinged folk for the listener. It’s not an album that arrests you at every turn, but—like a lot of good records—works its charms in the back of your mind. Taken individually, the songs make up a fine collection, from the Jayhawks-like pop of “In the Sun” to the swing of “I’m Going to Make it Better.” Here, a quieter, more desperate undercurrent comes out in tunes like “Brand New Shoes.” Still, it’s not the individual tracks that make this record fly, but rather the overall feel of the 14 in all. This is music in touch with a quiet, natural place in the world. Deschanel’s often breathless vocals play perfectly into it, while Ward’s spare instrumentation only makes that mood all the more clear.