It must be something in the air. Goldfrapp’s latest opens with a riff and vocal that could have been drawn from Donna Summer’s “She Works Hard for the Money.” That vibe never disappears from the latest by the electronic duo of Alison Goldfrapp and Will Gregory. You can hear it in the throbbing piano riff that powers the title track, the bouncy synth riff on “Shiny and Warm,” or the Laurie Anderson-like “Voicething.” Sometimes, the “guess the influence” gets a bit distracting—hmm, are they playing off the Human League or the Eurythmics on this track?—but that is overpowered by the general quality of the songs. For the most part, the duo didn’t forget to write actual songs to go with the nostalgic electronics. Goldfrapp isn’t as soulful as the above-mentioned performers, but she gives the music a singular modern-age moodiness, a 21st-Century wariness that says life turned bit more complicated than we thought it would be. 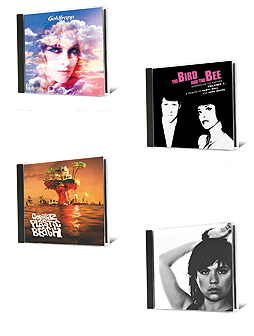 Interpreting the Masters, Vol. 1: A Tribute to Daryl Hall and John Oates
The Bird and the Bee

I may be a child of the 1980s, but I never have been much of a Hall and Oates fan. Being a rocker (and later punker) meant I usually sneered at such prefab soul. Still, when one of the songs came on the radio, I secretly would tap my toes, and sing along. The Bird and the Bee understand this, and they dedicate a whole album to the earlier duo’s mellow and smooth soul. It helps that Inara George’s vocals—from tone to inflection—aren’t anything like the original. The gender switch also gives it all a fresh, modern perspective. Instrumentalist Greg Kurstin retains the signature mood of the originals, but adds in oddball musical twists to make it feel modern without being too high tech. Meanwhile, you have the toe-tapping sing-alongs, from “Maneater” to “Kiss on My List” to “Private Eyes,” which I believe I had hidden behind the Prince and Bruce Springsteen singles when I was a sprout.

Starting life a decade ago as a cartoon side project, Gorillaz have grown into a going concern all on their own, becoming the artistic home of former Blur frontman Damon Albarn. He has indicated that this album may be all from the virtual band. If so, it’s a fine way to go out. The sprawling collection merges many of his own lyrical interests from the past 20 years with a who’s who of influential artists: Mos Def; Snoop Dogg; Mark E. Smith of The Fall; and Mick Jones and Paul Simonon, better known as the surviving members of The Clash. In fact, it’s these fellow Brits who get the best moments here, as their own worldviews mesh well with the host artist. The moody title track brings it all home, sounding like some odd relic from 1981, lost for three decades, and freshened up by a hot DJ. Plastic Beaches sometimes sprawls too far, but the whole ride is worth taking.

After nearly a decade of performing around the Twin Cities and the Midwest, singer-songwriter Sasha Maria recently released her self-titled debut. It’s a collection that shows plenty of promise. She has a nice Norah Jones/Tori Amos vibe going on here, and the songs showcase her vocal skills quite well. The slow-burning “My Beautiful” is a real highlight here, from the smoldering vocal line to the bluesy guitar solo by Jonathan Earl Nelson. Elsewhere, a few too many laid-back mid-tempo pieces may be found. These songs, while fine on their own, blend together into a seamless whole that just sits in the background, instead of arresting the listener like the best cuts here. Still, several others stand out as well, including the syncopated riffs and compelling vocals of “Blink of an Eye,” and the smoldering, jazzy mood of the closer, “Wanting.” These are the moments that make me look forward to Sasha Maria’s next release.