Even amid the brittle beauty of Low, you always could tell that guitarist Alan Sparhawk wanted to crank it up and rock. Though Low continues at its own pace, Sparhawk’s other projects—including Retribution Gospel Choir—give the guitarist and singer a chance to heat it up. The songs here are, like the first album, rock hard, laden with distortion and feedback, but it’s much more Neil Young’s fuzzy pop than some kind of postrock extremism. Pieces like “Workin’ Hard” and “White Wolf” wouldn’t sound out of place on a Jayhawks record. The album has fuzzed-out extremes, but they’re mostly to be found in a pair of 30-second snippets. Meanwhile, the slow-burning “Electric Guitar” gives Sparhawk a chance to unleash some pretty impressive lead work, while the balance of the band lays down a rock-solid rhythm. By the end, this brief album leaves the listener spent, and wanting more. 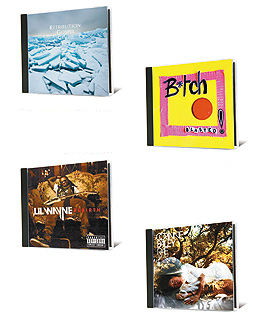 You’re promising a lot when you take the stage name Bitch, but the artist takes that handle by the horns on her latest album, Blasted. The multi-instrumentalist makes a glorious racket here, merging eclectic tastes in music with a punk rocker’s pure spirit and bracing, honest lyrics. Self-produced and released, Blasted finds Bitch brimming over with confidence, even though the album traces a difficult time of breakup and the long recovery that followed. This is clear in plenty of the tracks (the self-explanatory “Lost You” and the title song), but even with that backdrop, the proceedings never become maudlin or overly bitter. Instead, it’s like a report from the other side, showing anyone willing to listen hope amid the darkness, as long as you stay honest. Oh, and the music, led by her violin, absolutely cooks. Plenty of women artists play at being “fierce.” Bitch is the real deal.

Ah, schadenfreude. Lil’ Wayne has been at the top of the hip-hop game for years, so when he announced he was making a rock record, but it was delayed multiple times, you could sense his detractors sharpening their knives. Now that Rebirth is here—well, it’s time to feast. Rebirth could be the worst rap-rock album since Ice T’s horrid Body Count releases of the 1990s, and a misstep that rivals Garth Brooks’s rock-’n’-roll foray. On the album, we learn that while Lil’ Wayne is a facile rapper with an easygoing musical style, he cannot (1) play guitar; (2) sing without frightening amounts of autotune; and (3) understand what actually goes into making, at the very least, an enjoyable rock tune, let alone a good one. It’s like the album the characters in Boogie Nights made, except in this case, it actually came out, and got a major-label push. Now, can the weezy one make a comeback?

Grief can be an amazing catalyst for art, especially music. Songwriters already wear their emotions close to the surface, and heartbreaking loss only can bring those emotions higher. British songstress Rae was dealt a huge blow when her husband, David, died of an apparent overdose. She turned that moment and the confused emotions that followed into this, her stunning second album. Her music is hard to fit into any simple box, as she is at ease with rock, pop, soul, and R&B. Instead of trying to fit into a genre, songs like the striking opener, “Are You Here,” show her following the direction of her muse, instead of just any simple classification. Yet, despite the heavy nature of the material, the album never sinks into a maudlin mood. Yes, it is at turns sad, angry, and lost, but by the end, you can sense that Rae has come through the other side of her grief, ready to continue on.