The first thing you hear on this album is Ke$ha singing the opening lines of “Your Love is My Drug” with completely untreated vocals. It’s such a rarity these days on a pop record that I was stopped in my tracks. Perhaps here was a vocalist with enough confidence in her own skills really to let us hear them. Alas, the electronic effects kicked in during the chorus, then with annoying regularity throughout Animal. It’s all a shame, as the singer actually could bring the vocal goods if she just gave herself the chance. Otherwise, the album is pretty much pop-by-the-numbers, mixing songs with humping beats (first hit single “Tik Tok”) and ballads quickly exploding with epic sweep perfect for slow dancing at the junior prom. Signs of some real life (“Party at Some Rich Kid’s House”) are here, but for the most part, this is—frighteningly enough—Lady Gaga light. 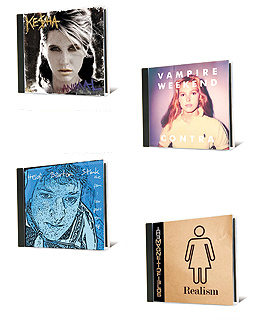 For a band with such an innocent sound, Vampire Weekend certainly is a divisive act. They were touted heavily months before their debut came out in 2008 (even making the cover of Spin before the album arrived). It became an indie hit, but just as many people were skeptical of the band’s rise. The music—a fusion of classic pop and African influences—only continued to split folks. Personally, I found it all too twee for me—substituting raw passion for intellectual curiosity. Or, maybe I thought I just could listen to my Talking Heads records for the same effect. Contra is better than the self-titled debut, in part because the band does a better job of merging the different influences into a coherent whole. While overplay has made me sick of opening single “Horchata,” other tracks, like the skittering “California English,” show signs of life. Still, I just want to listen to my Talking Heads records.

The free, seven-track EP is the first salvo from this local transgender rapper, and it’s a strong debut. Befitting a hip-hop artist from the Twin Cities, these songs are about much more than just finding love on the dance floor. Instead, Stink goes toe to toe with society’s expectations (“Direct Action”) and substance abuse (“Pick Your Poison”). At its heart, The Familiar Pattern is a celebration of being true to yourself. That’s clear on opener “Love Who” and closer “Never Got It,” both of which push expectations aside for the truth inside. If the EP has a weakness, it is in the music itself. The pieces on The Familiar Pattern aren’t nearly as memorable as the words that surround them. The beats and rhythms often sound just as a mere backbeat for the words. That’s certainly not unique to this album, but it could keep a really innovative talent from reaching the wide audience she deserves.

Welcome back to Stephin Merritt, who moves away from the noisy misery of the last Magnetic Fields album, Distortion, to the more-familiar, quieter pop misery on Realism. Designed as a companion to the previous album, the new one voids electric guitars and other electronics almost entirely, crafting an understated set of tunes that owe much to Nick Drake. This Drake comparison really rings true, especially as Merritt looked to the folk music of the late 1960s as inspiration, finding the same otherworldly vibe that fueled so many of those records. That’s clear on tunes like “Always Already Gone” and “From a Sinking Boat.” The band even employs a sitar to complete the vibe. Even when the electric guitar comes out—on late-in-the-album “The Dada Polka”—it comes off more like a Brian Wilson-led Velvet Underground would have made. The noise may be gone, but the sterling songwriter remains—which is all that matters.