Really, this is how you do funky pop music. Har Mar Superstar (stage name of Sean Tillman) takes a lot of cues from the classic funk and disco of the 1970s to make his music. Along the way, he dips into more recent styles, from hip-hop to electro-clash, while never letting it overwhelm his basic sound. Opening single “Tall Boy” (reportedly rejected by Britney Spears—if so, her loss) lives on a spare, electric beat over which the Superstar weaves a tale of sexually ambiguous conquest. Some of it isn’t ambiguous at all—after listening to “Almond Joy,” you never will look at the previously innocent candy bar the same again. “Creative Juices” takes a series of non sequiturs, and runs with it, reaching an apex (or nadir, I’m not sure) with “I wish I was Arthur Lee to get some Golden Girls love.” Hard not to love the 40 minutes of Prince-inspired musical insanity Har Mar makes. 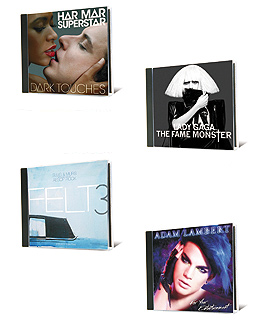 As the breakout star of 2009, Lady Gaga can show Adam Lambert (see review this column) how it’s done. Sure, some of her music can be downright awful, but she has amazing confidence in her music. She’s willing actually to take it places beyond the safe zone where makeup and pianos are tortured. The Fame Monster is a new EP that builds on the success of The Fame (some versions even include the parent album) by unleashing eight new tracks. Opener and lead single “Bad Romance” sets the stage—heavily processed and programmed music, and a lyric that’s pretty nuts from beginning to end. The music, however, has enough tangents buried in the mix to make it an interesting listen, while Lady Gaga herself lives and dies with every “ra-ra-ra ah-ah.” In other places, the sequencers are put away, and a real band takes the stage, giving tunes like “Speechless” a living edge.

Considering how fallow hip-hop was in the Twin Cities for so many years, the recent renaissance has been something wonderful to watch. Acts like Atmosphere have gate-crashed the national scene, while P.O.S. and Brother Ali both have issued terrific albums this year. Felt showcases what makes underground hip-hop tick: a good lyrical flow and clever musical backdrops, plus a socially aware attitude miles away from the typical women, money, and guns attitude of most modern rappers. Producer Aesop Rock brings a heavy, punk rock-like atmosphere here, though always leaving enough space for the vocalists to do their work. The songs range through numerous topics, but take a hard, honest look at modern life. Heavy-duty pieces like “Protagonists” and “Glory Burning” occasionally are tempered with moodier meditations. Even these, like “Give it Up,” are still as heavy as a metal album. Rosie Perez should be proud.

For Your Entertainment
Adam Lambert

Note to Adam Lambert: If you are going to glam yourself up like a coke-fueled 1970s David Bowie on your album jacket, you might want to make sure the music inside has a shred of originality and life. Instead, the debut by the talented American Idol runner-up plays like any number of dull pop albums from the last decade. You’ve got songs designed to pack the dance floor and ones to tug on the heartstrings, all with the airless, overprocessed sound that appears actually to have been performed by robots. Lambert has plenty more talent than a lot of the recent popsters, and his soaring voice sometimes cuts through the clutter at least to engage the listener. Still, when a song called “Strut” just makes you want to walk calmly with your head down, while “Time For Miracles” is so trite Michael Jackson would have rejected it, you know it’s time to head back to the drawing board.