Embryonic
Flaming Lips
For the past 25 years, the Flaming Lips have been masters of modern-day freakout music. Through their long career, this mad band of Oklahomans have crafted an artistic ambience that would have made the denizens of Swinging London or Warhol’s New York proud. On their latest, the band goes one step further, making music that sounds like it’s a bona fide lost piece of 1960s music, complete with swooping organ lines, drifting melodies, and guitar parts fueled by substances banned in most states. This music works best when it’s dark, either late at night or early in the morning, and turned down low. It’s a long, sprawling, double album of the type you usually want a band to rein in, but the Flaming Lips go for complete broke here, making a mad, maddening, and ultimately engaging collection of tunes. Embryonic is more about the aural journey than pop music, but it’s absolutely engaging all the same. 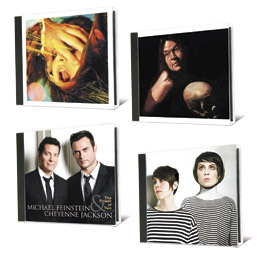 I and Love and You
The Avett Brothers
Over the past few years, the Avett Brothers have built a name based on their folksy Americana style music. They’ve left their indie days behind, crafting music that is broader and deeper in sound, but doesn’t leave behind the essential heart of their earlier work. The changes are clear from the opening title track, which is powered by a piano-played melody, and features (gasp!) strings in the background. The song, a bittersweet look back at a relationship, uses all these elements to fine effect, while the vocal makes the heart ache, but you want to hear the song again. The album features a mix of the trio’s stripped-down folk and bluegrass tunes that have become a part of their music. The 13-track album has plenty of standouts, but it’s made up of such diverse influences that hold up as a musical whole. That’s the biggest reward for the listener.

The Power of Two
Michael Feinstein & Cheyenne Jackson
If you’re looking for something a bit more traditional, you can turn to this CD version of the duo’s nightclub show—at Feinstein’s titular club in New York City—from last summer. The two move through a number of pop standards and Broadway show tunes—not surprising, considering their respective backgrounds (Feinstein’s years as an interpreter of classic pop music; Jackson’s years on Broadway, including the current lead in Finian’s Rainbow). The disc has an engaging, warm sound, with the main duo backed up by a tight five-piece jazz combo—though all that does slip occasionally over into “lounge lizard” territory. Still, when the duo hit the highs, it’s an incredible ride, such as on standout solos like Feinstein’s tender “Old Friend” and Jackson’s closer “Someone to Watch Over Me.” The two also share vocals throughout the collection, bringing out new meanings to standards like “Me and My Shadow” and the title song.

Sainthood
Tegan and Sara
As Tegan and Sara (short history: identical twins from Calgary who started recording as teenagers a decade ago) have grown, their music has taken on a more complex sound, without ever losing its singular, youthful charm. That’s still evident here, as the two—along with Death Cab For Cutie’s Chris Walla as producer—craft 13 tight (the longest track is three-and-a-half minutes) rocking pop songs that dig into three decades of alternative music without ever aping the sound of the past. It results in a driving, mature set, led by first single “Hell,” and featured in tracks throughout. The sense of leaving youth behind comes up again and again—check out the ironic “talking like a teen” chorus to “On Directing” for an example. All these factors make for a satisfying collection that’ll keep the fires of youth burning through the long winter until their local show. Tegan and Sara play the Orpheum on March 24.